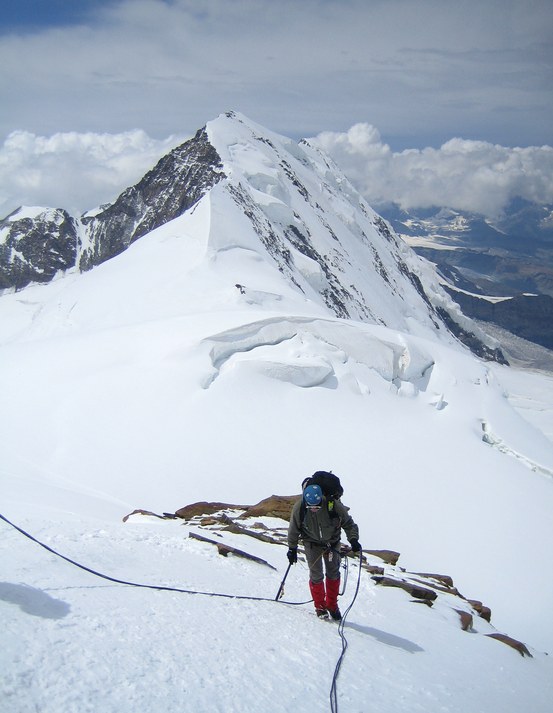 Before spending a night at the Rifugio Regina Margherita (4554 m) we wanted to be properly acclimatized. Therefore the plan for this day was to ascend to the area south of Dufourspitze, to climb a bunch of the small 4000 m peaks, and to return to the Rifugio Gnifetti. There we would spend another night.

We got up pretty late, had a hearty breakfast, and it was already 8am when we finally took of. Not quite an alpine start! The area between the Rifugio Gnifetti and Rifugio Regina Margherita seems to be built for the collector of small 4000m peaks that barely make for independent mountains. If I remember correctly, we climbed in this order: Piramide Vincent (4215 m), Balmenhorn (4167 m) (featuring a stinky emergency hut called Bivacco Giordano), Corno Nero (4321 m), Ludwigshöhe (4341 m), and finally we traversed Parrotspitze (4432 m) where we summited just after 2:30pm. It took between 30min and 1:30 hours to ascend each of these mountains. The normal routes are all technically without difficulty, except Corno Nero which has a short but steep and icy ascend that finishes with a rocky ridge. On that ridge we run into 3 Basques who got all tangled up in their ropes and ice tools that where hanging from their wrists. While waiting for them, we had ample time to enjoy the scenery as well as the show which was quite entertaining.

The weather was gorgeous and the views where great. Dufourspitze, the highest peak of Switzerland, is close by to the north. To the southwest there is Lyskamm, which we would climb 2 days later, with its intimidating north wall. Between these two mountain one has a great panoramic view with many of the most famous peaks and massifs in the alps: Castor; Pollux; the Mont Blanc massif with Mont Blanc, Grandes Jorasses, and Aiguille du Midi; Grand Combin; Matterhorn; Dent Blanche; Zinalrothorn; Weisshorn; Jungfrau and Eiger at the horizon; and many more peaks that Rainer named but which I have forgotten. 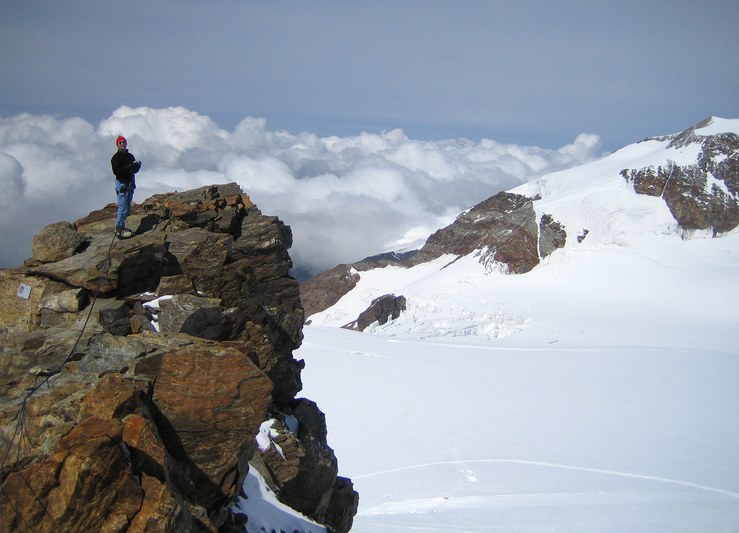 When we had finished climbing all the little peaks in the vicinity we trotted back down the glacier. The snow had softened considerably, no wonder with our late "alpine" start. We negotiated the crevasses carefully and made it back to the Rifugio Gnifetti at 4:30pm where we later enjoyed a good dinner. This was also the night of the Football World Cup final match between France and Italy. This was probably the reason why there were so few people at the hut. That night I didn't feel too well and spend a few hours in the hallway and at the restrooms. It was probably due to the altitude. The next morning I was tired but luckily I felt well. 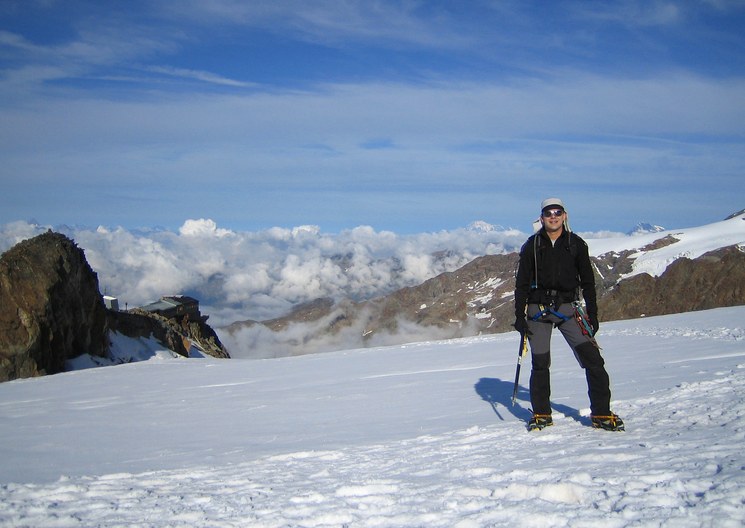 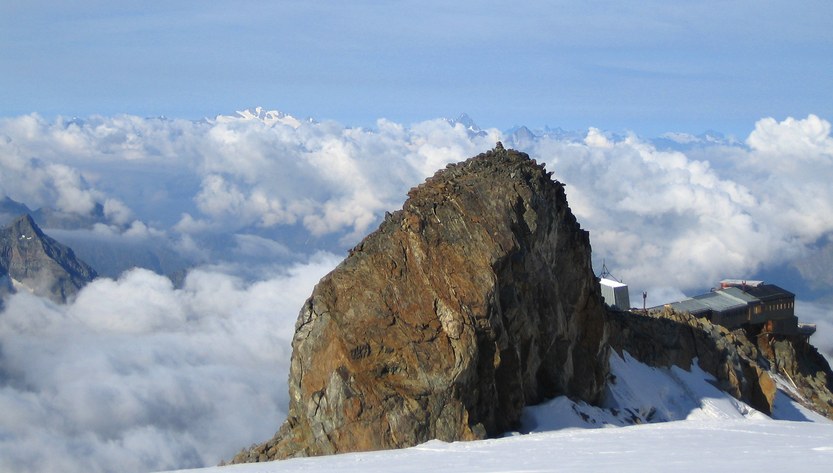 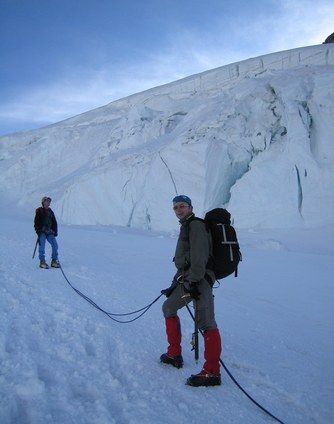 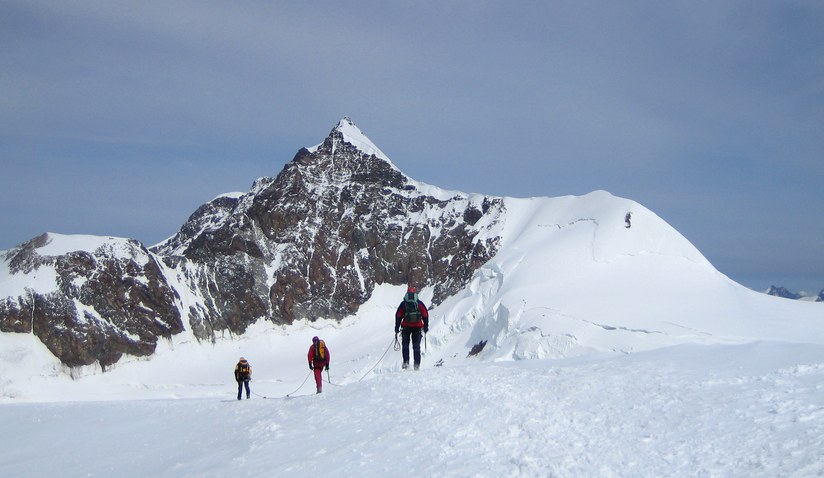 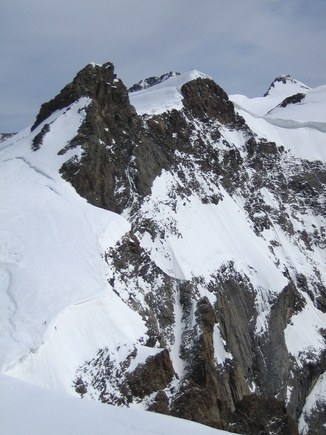 Ludwigshoehe, Parrotspitze, etc: Signalkuppe seen from the south, climbers climbing over a cornice 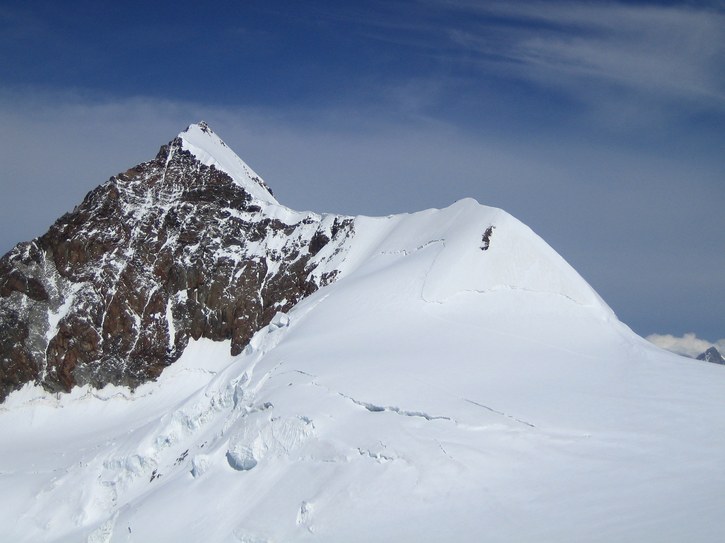 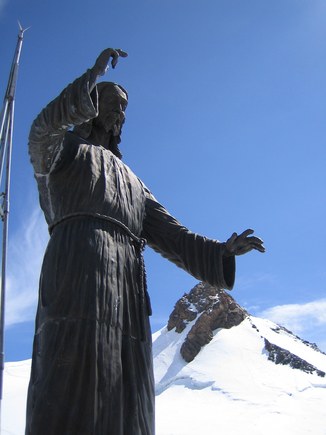 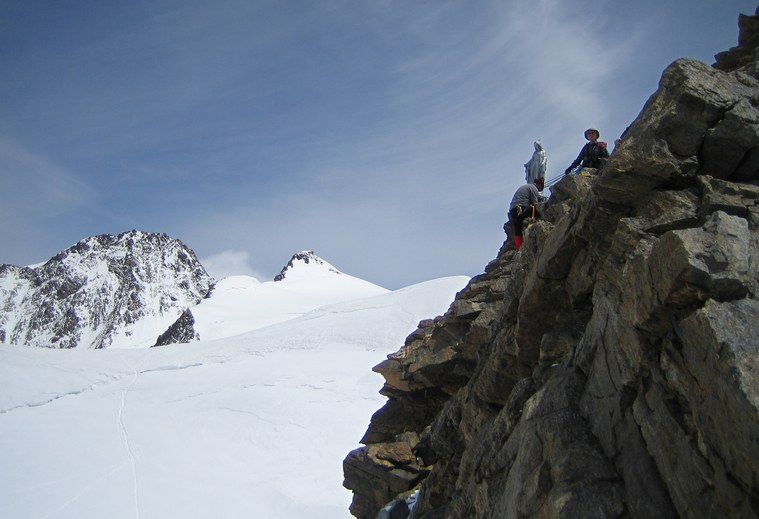 Ludwigshoehe, Parrotspitze, etc: on top of Corno Nero, Dufourspitze, Zumsteinspitze, and Signalkuppe in the background 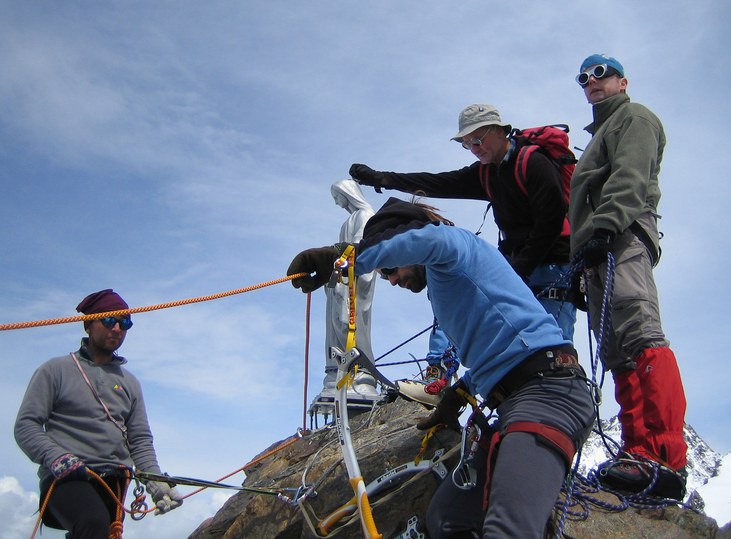 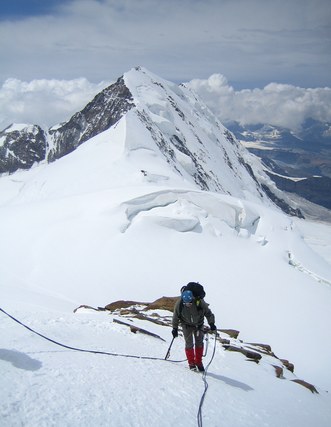 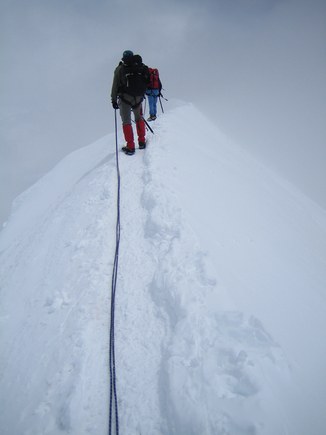 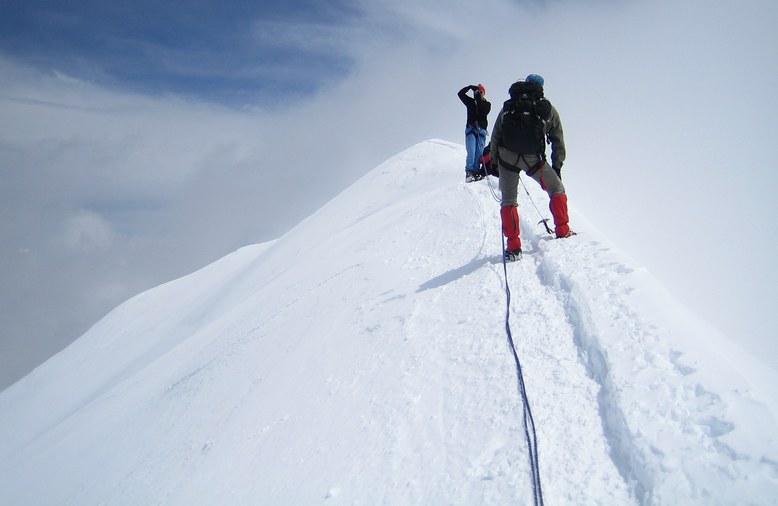