In the four years that I've lived in Seattle somehow I had never managed to visit Mount St. Helens. So this past weekend Andreas, a friend of mine from Germany, and I headed down to Helens to climb it (or whatever is left of it). I had tracked the weather report for the long weekend and it didn't look that good; except that it kept saying the area would be "in between systems" on Monday. So that's what we were aiming for.

We drove down on Sunday afternoon. I was worried about the permit situation because of the holiday and even more so when we say a big charter bus parked at Jack's restaurant. It turned out, however, that they had reserved permits in advance and wouldn't count towards the 50 they give out at 6pm every day for the next day. To kill the time until 6pm we checked out Ape Cave (dark) and Lava Canyon (deep) and went back to Jack's where only about 20 people had shown up---no need for a lottery. We bought our permits ($15 each) and headed to climbers bivy to pitch our tent on snow.

We got up at 4 Monday morning and were on our way by 4.30. The snow was fairly consolidated and walking was easy. At some point we put on crampons. The "climb" was then more of a stair ascend with "pre-manufactured" stairs most of the way up. Reached the crater rim by 8.45. The look down in the crater on the lava dome is pretty impressive. The weather was fairly good, clouds moved in and out frequently revealing Hood, Adams, Rainier (stuck in a lenticular cloud). We had a good time on the summit watching the show. Met three other parties there. When we went down at 10.15 the snow had gotten pretty soft. Good for us, so we could comfortably glissade the whole way down but bad for the 4-5 parties we met that where coming up and had a pretty tough time postholing (except one party on skies). Arrived at the car two hours later and went back to Jack's to sign out and eat something.

Since it was still early in the day we decided to check out Helens' north side. So we drove to Johnston Ridge Observatory (it's close to a 3 hour drive) were we watched a cool movie and even learned something interesting about volcanoes making this a cool day of "climbing" with an educational twist.

This was a private climb with a party of two consisting of Andreas Zoch and myself. 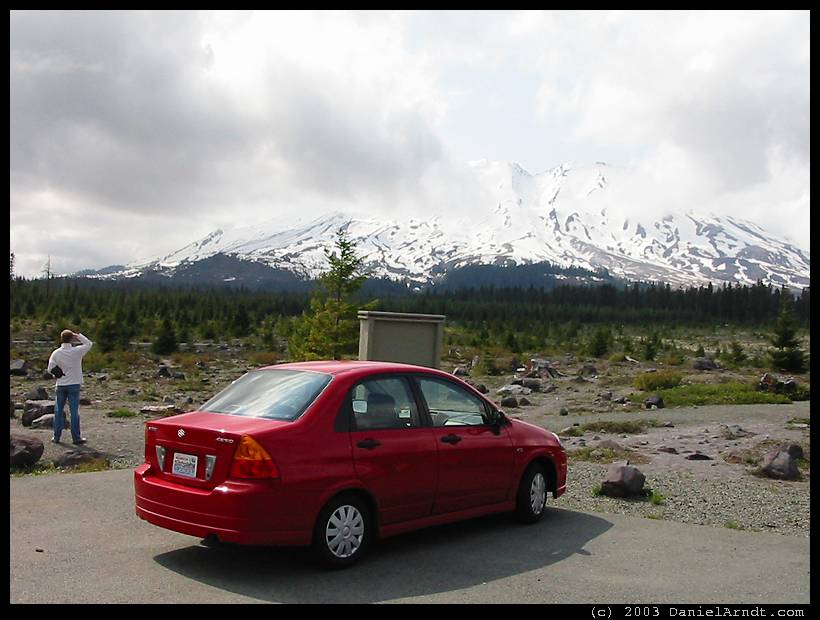 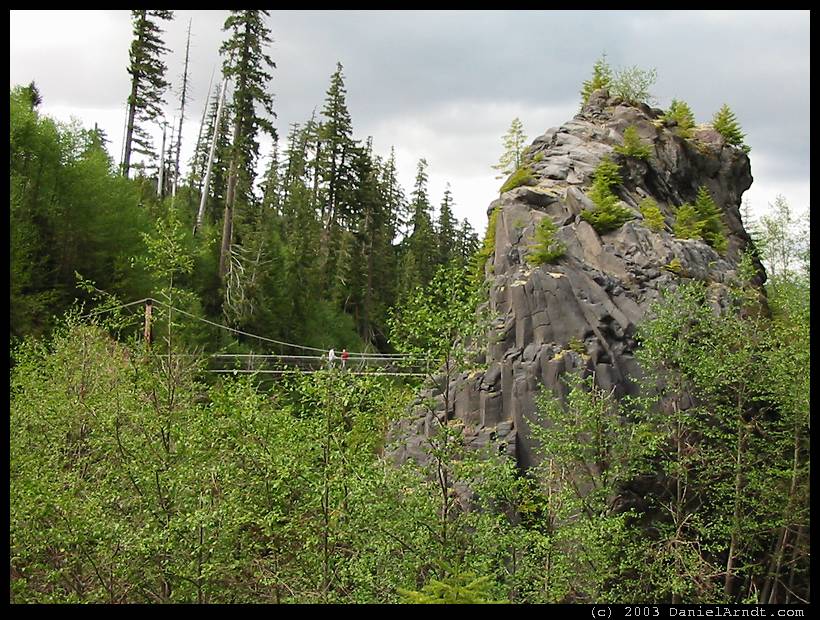 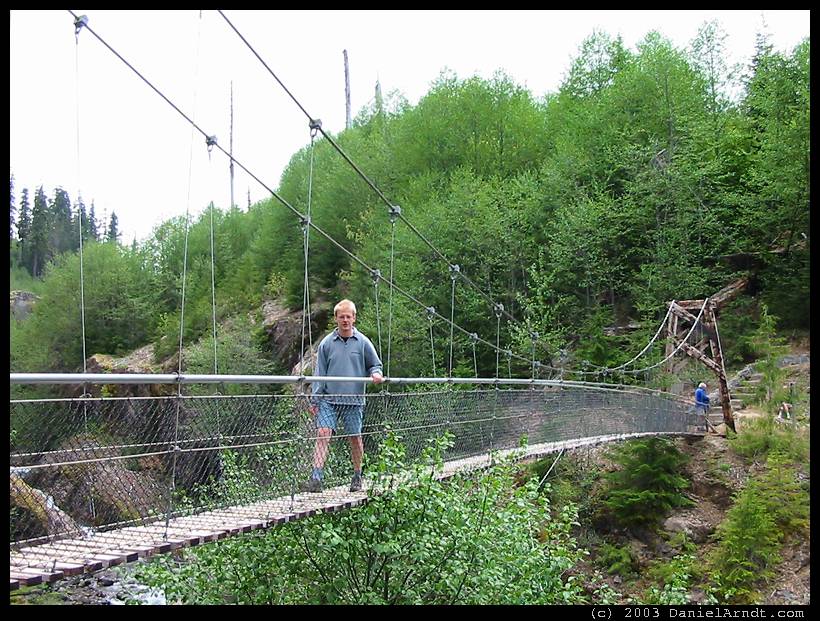 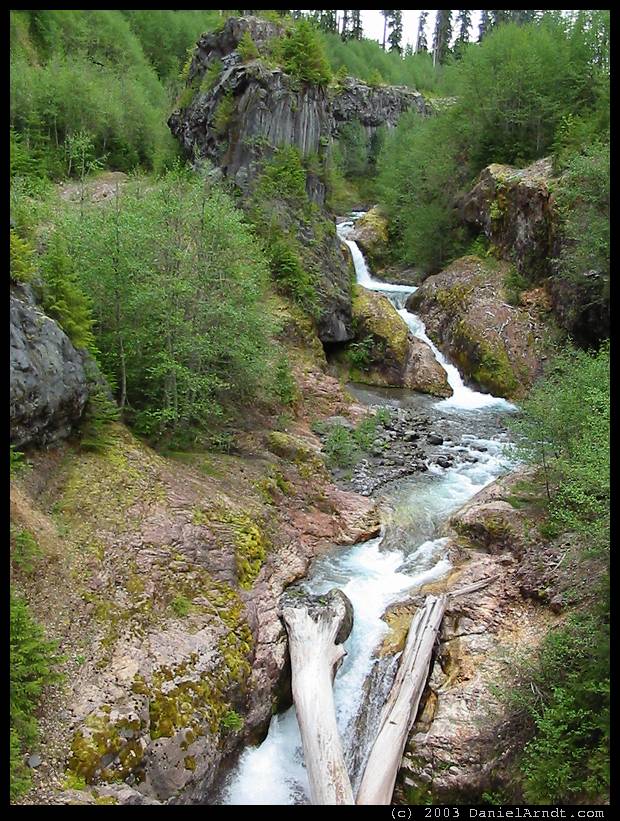 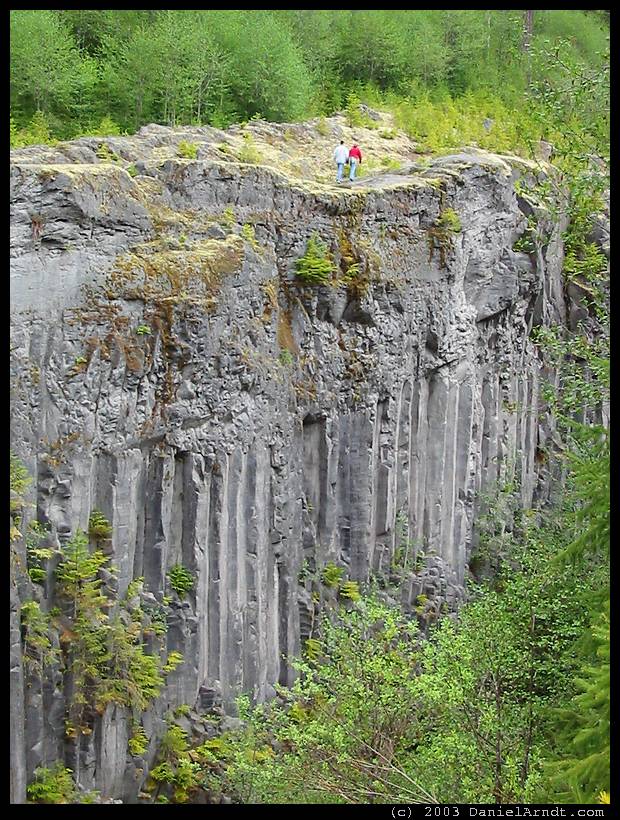 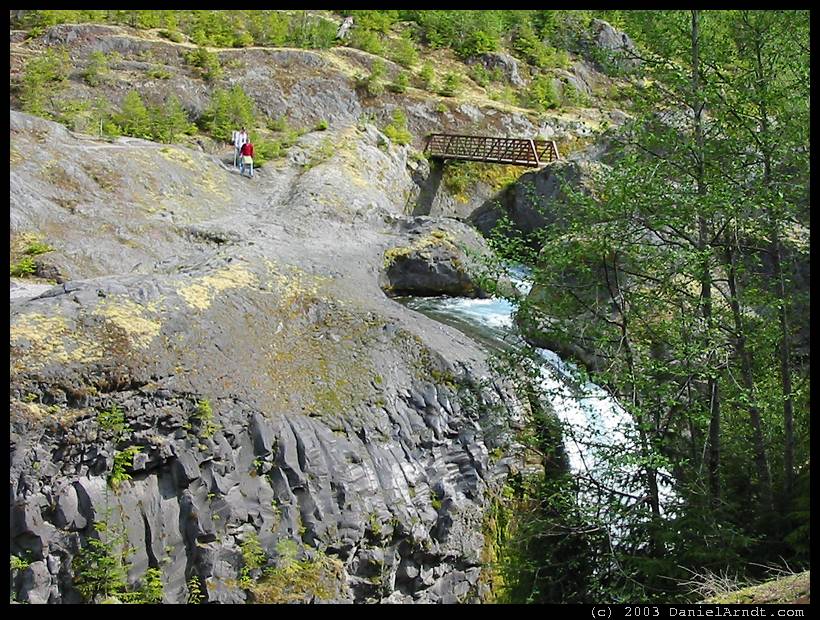 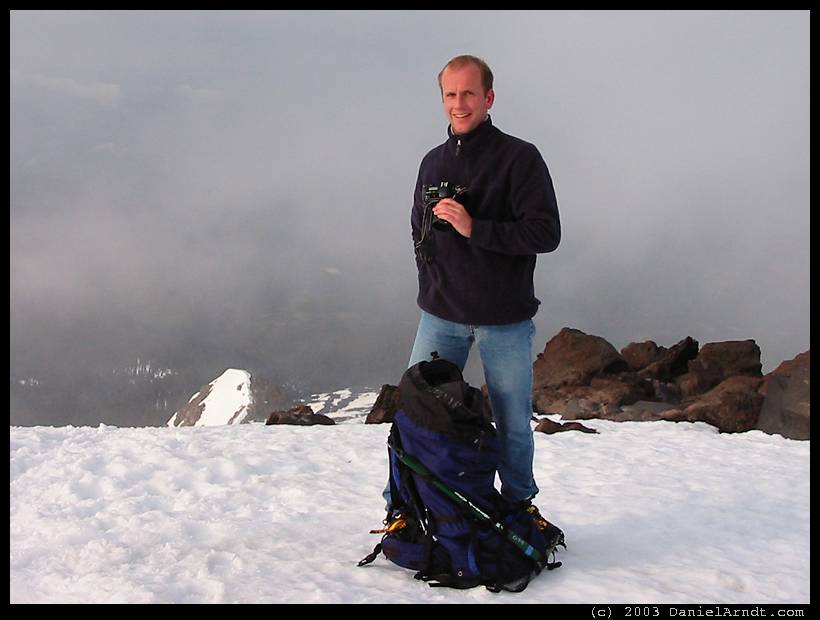 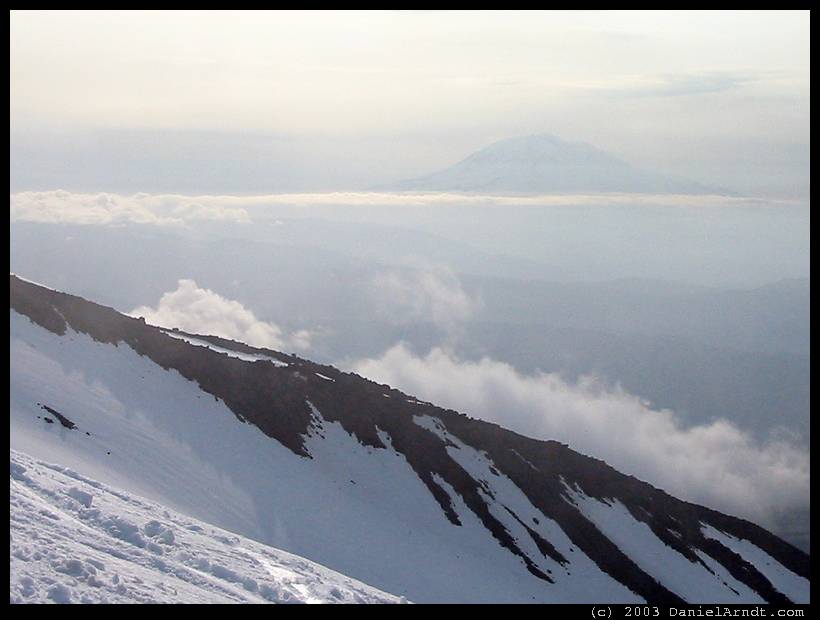 Climb of Mount St. Helens: Mount Adams in the background 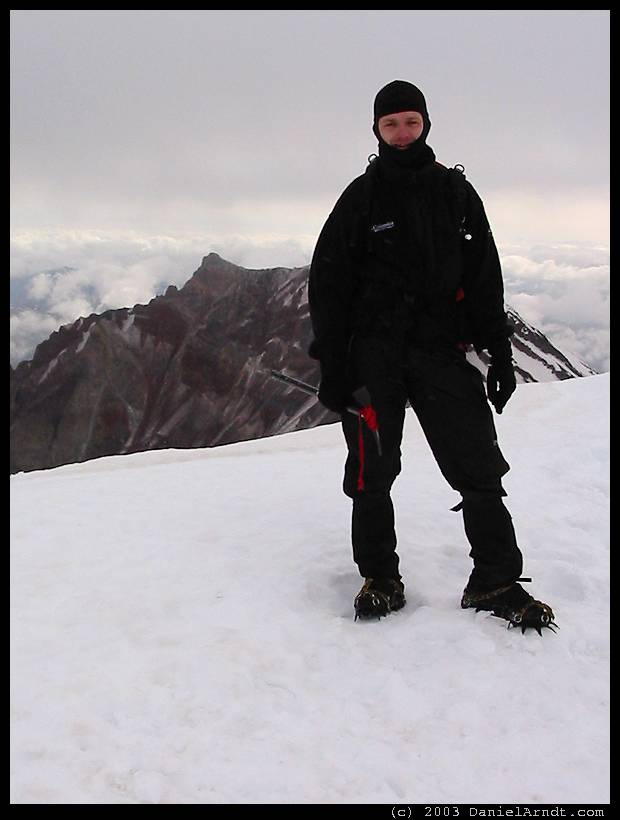 Climb of Mount St. Helens: looking over the crater to Mount Rainier 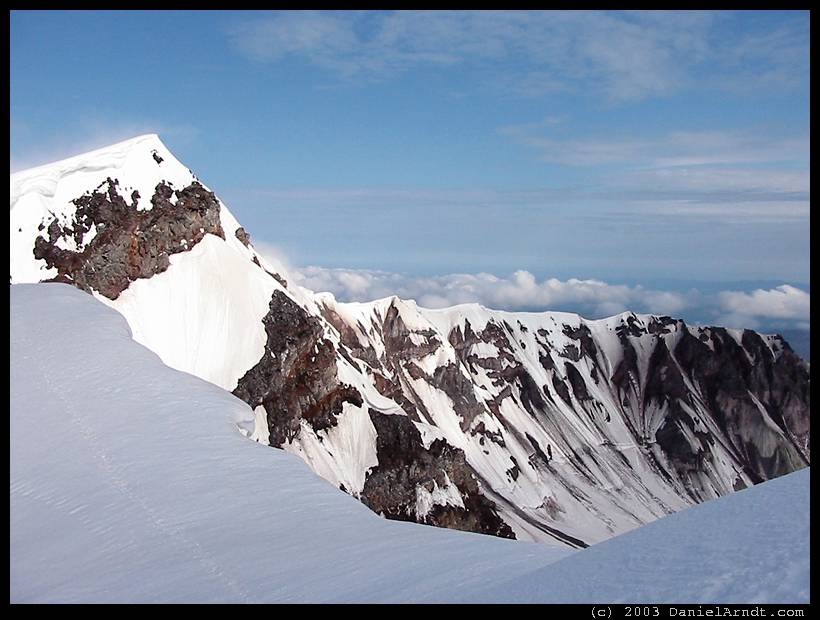 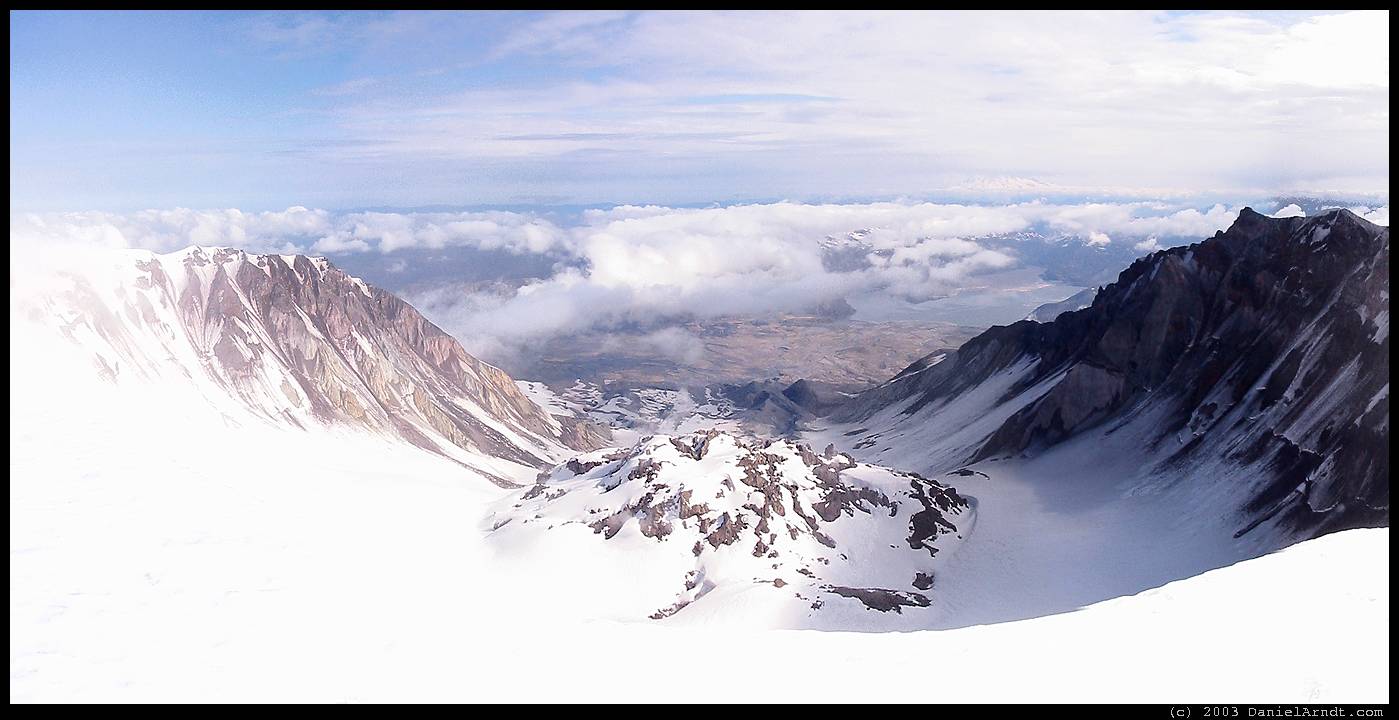 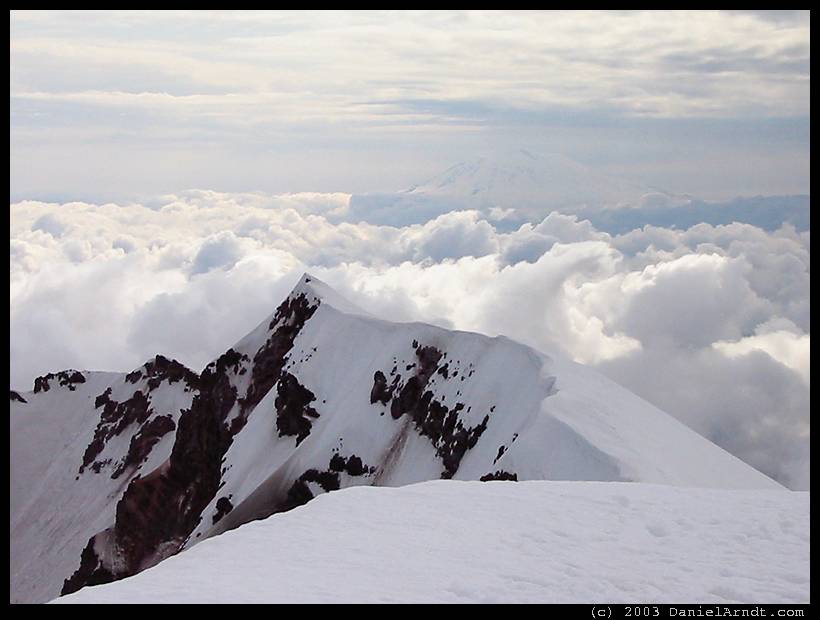 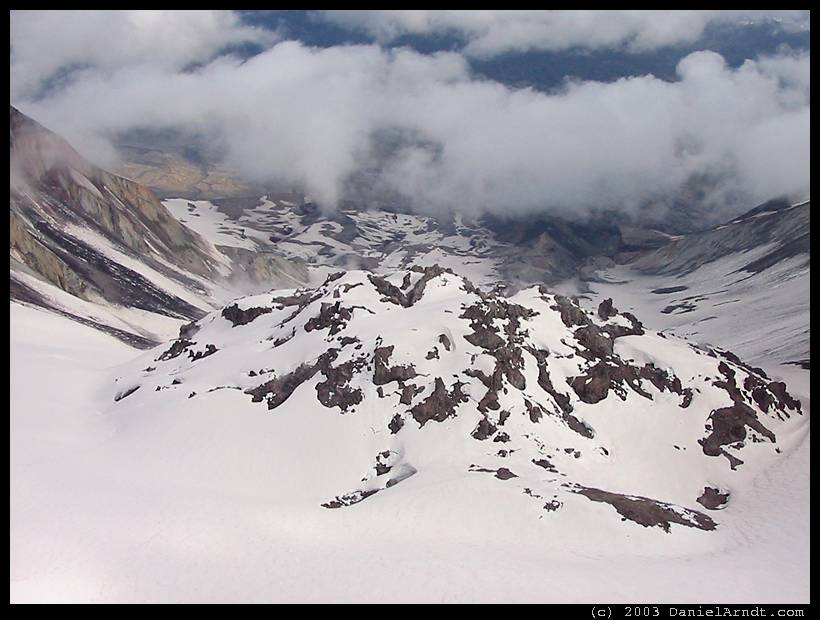 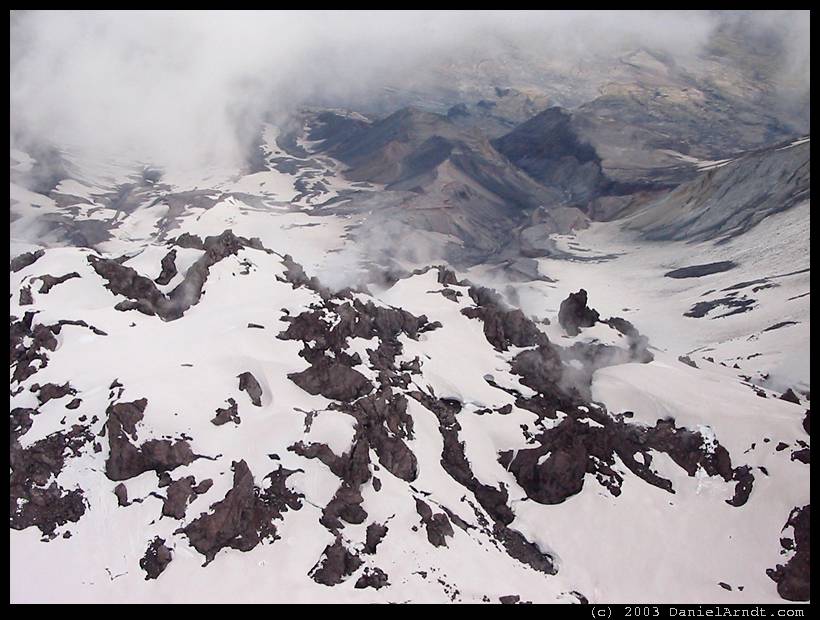 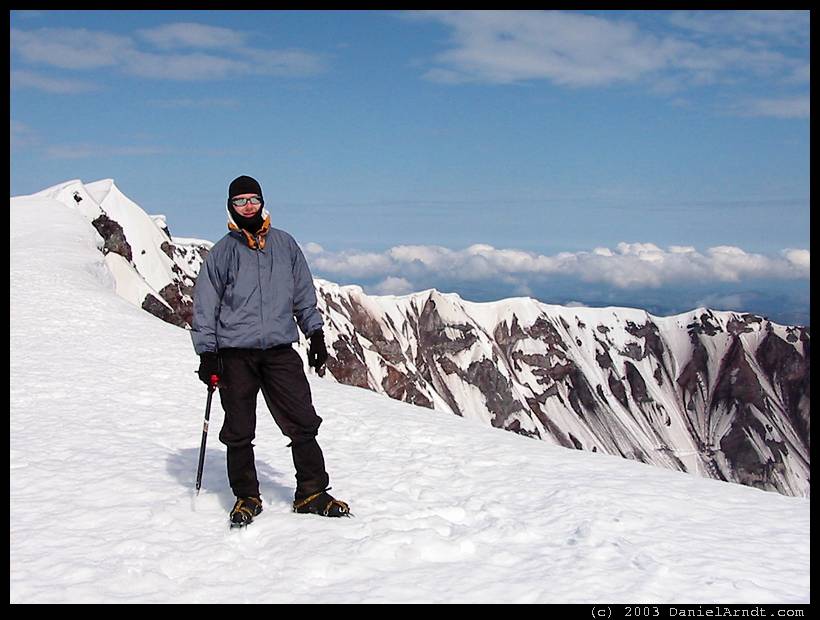 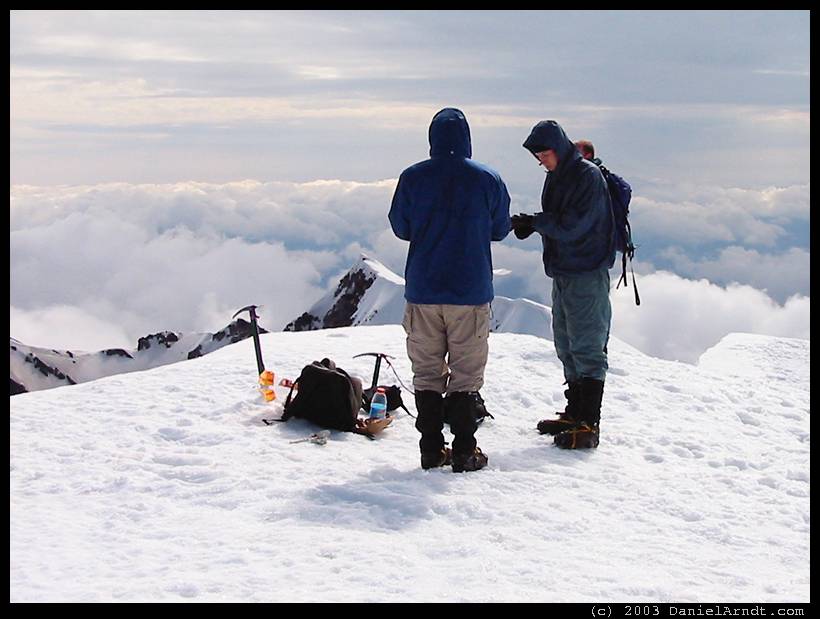 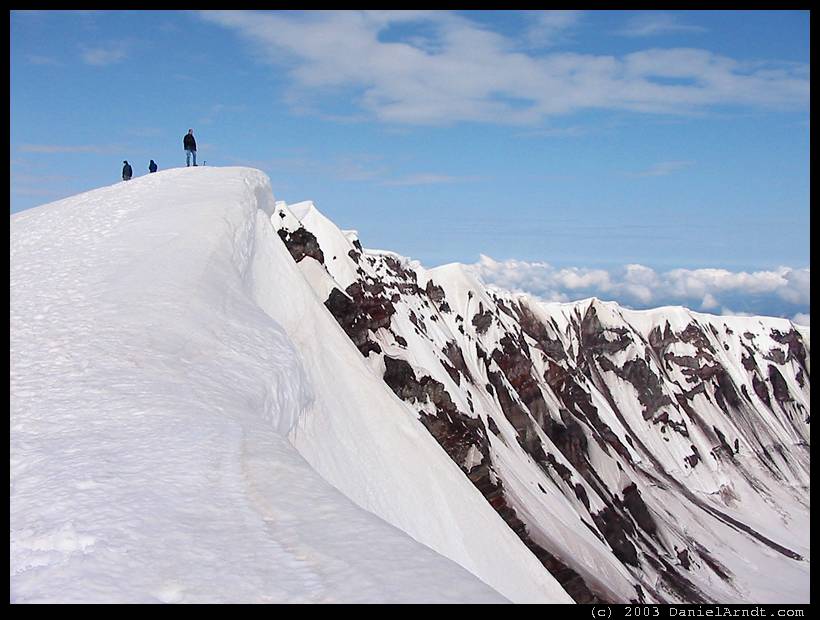 Climb of Mount St. Helens: on the crater rim, watching that cornice 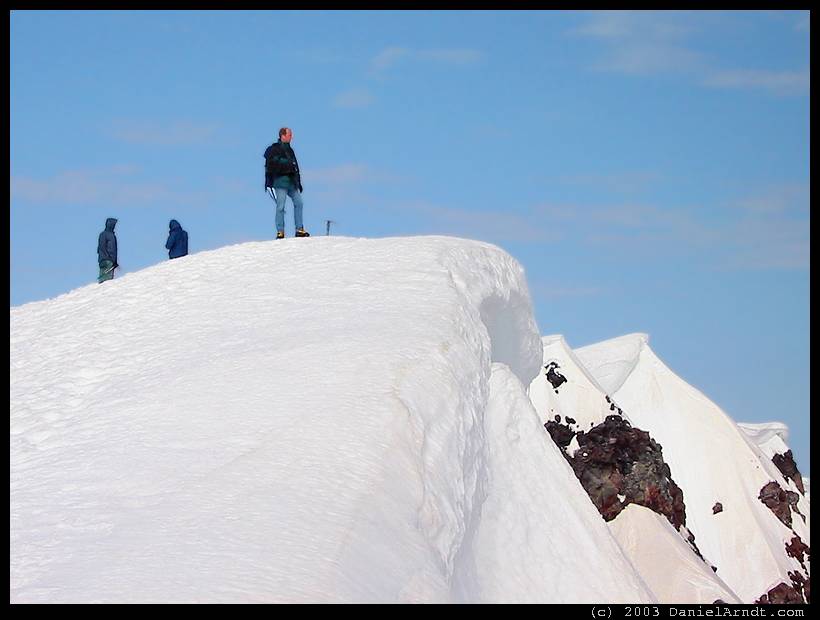 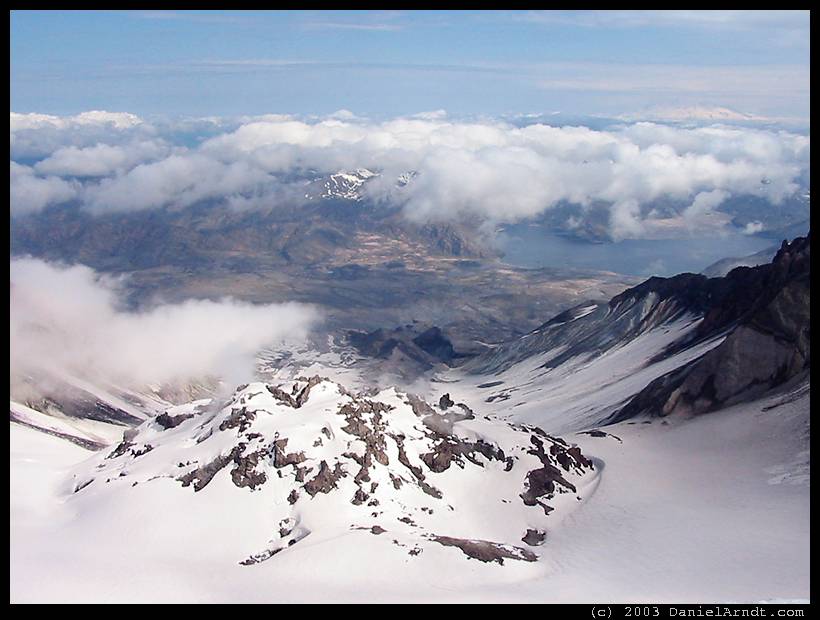 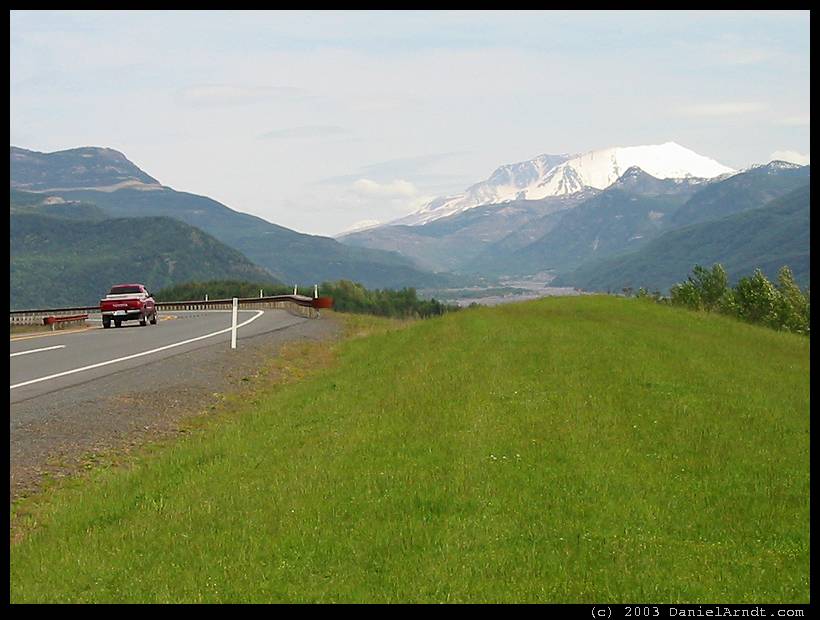 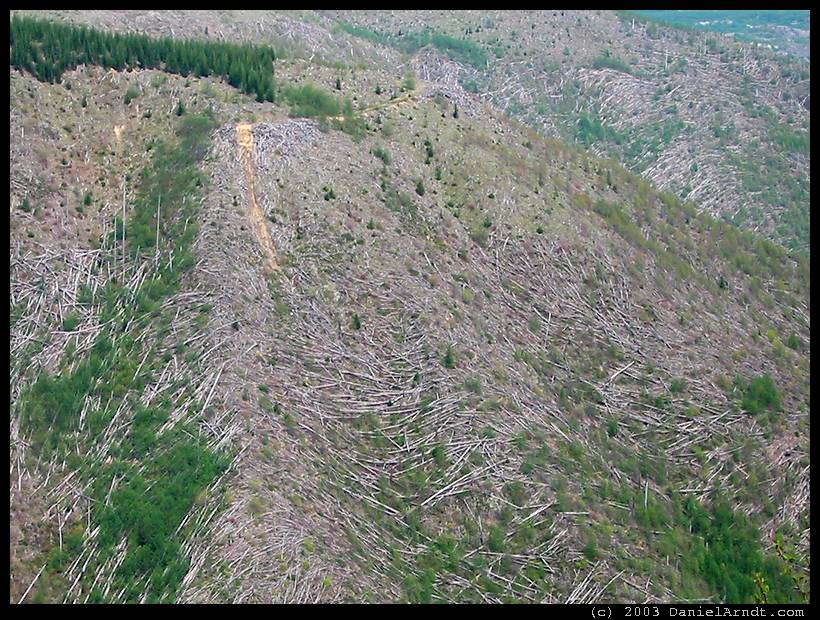 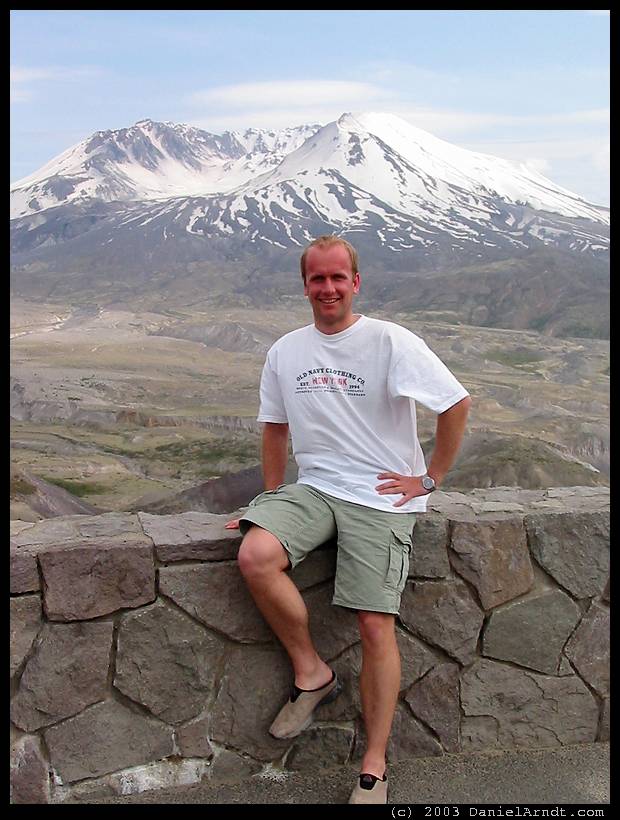 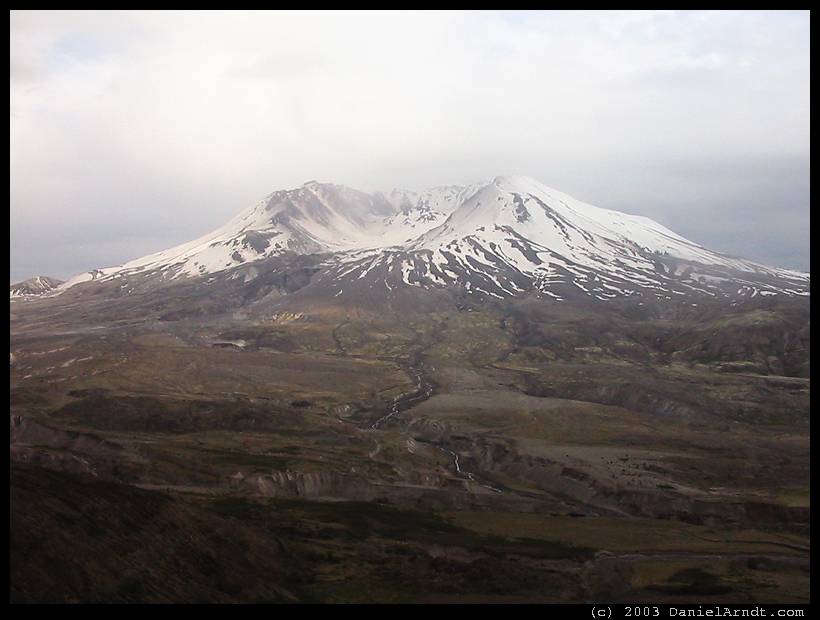 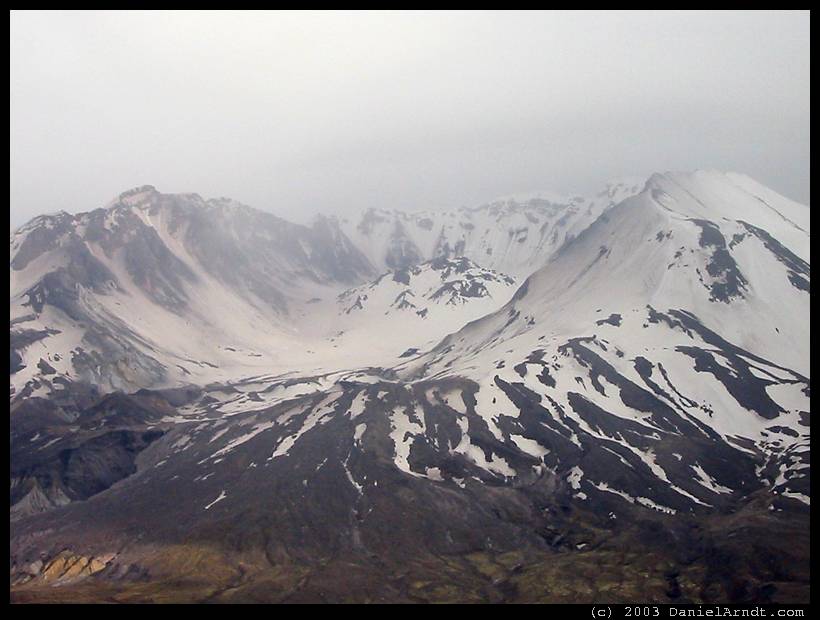