Last Saturday Jim and I climbed Mount Adams via the South Spur. As this is a nontechnical climb we left rope and climbing gear at home and---traveling light---did it in one day rather than the usual two days.

Both of us had tried Adams before but had to turn around for various reasons. When I did it two years ago with a friend from Germany it was a disaster. Not knowing what an alpine start is we weren't going until 8am. Since we had neither ice axe nor crampons we were forced to scramble on scree up the ridge west of the snowfield which was painfully slow. At some point it had gotten too late and we decided to turn around. Desperately trying to glissade down the snowfield we used my ski poles (that I had brought as hiking poles) as a brake. This ingenious system worked pretty well until both poles were bend in unique shapes. (I still use them for skiing though. They now look like these poles the pros use for racing.) Anyway, after this experience I decided to take the Mountaineers Basic Climbing Course...

We drove down Friday afternoon, Jim was driving, and I was navigating the maze of forest roads. We chose to pass Mount Rainier NP on the east side using Highway 410 (that's the same way as going to Crystal Mountain in the winter) before hitting Highway 11. It might be faster to go down I-5, but this route is certainly more scenic. From Highway 11 we took FSR 23 (the road is small but even the short gravel section is in pretty good shape) that got us directly to Trout Lake (4.5 hours from Seattle) where be purchased climbing permits ($15 per person). Drove to Cold Springs Camp Ground, pitched the tent, ate, and went to sleep.

The intention was to get up at 3.30am and be going by 4. When I woke up at 3am the wind was howling like crazy at which point I was glad we where not camping high at the Lunch Counter. We finally got up at 5am and left camp at 5.30am. The wind was still pretty strong but the sky was clear, except a huge lenticular cloud that had formed over the summit. Several parties that had camped along the way where not sure if they would be going up considering the conditions they would be hiking into. We, however, pressed on. Soon the big cloud disappeared but it would appear and reappear throughout the day. The first part was on trail and then on volcanic scree but soon we reached snowfields where we put on crampons. Except a very small section we could climb on snow all the way to the false summit which made for very pleasant travel.

We reached the false summit at 11.15am and the summit at 12.15am. Although there were probably 40 mi per hour winds, some spots were pretty well protected like at the remnants of the old hut. The view was pretty good although the panorama is basically limited to Hood, Helens, and Rainier. We hung out on the summit quite a while and started down climbing at 1pm. There was a looong glissade that went down to just above the lunch counter which was fun and made for quick travel. The rest of the way was uneventful and dull. We arrived at the car at 4.30pm, after just about 11 hours round trip. We drove back via FSR 23 to Highway 11 and then west to I-5.

In our opinion the only way to do this climb is in one day. When we saw all those people hauling up huge packs as if they would start a weeklong undertaking we were smiling at our small daypacks. In addition, the south side of Adams is not that scenic to justify a camp---there are much more spectacular places in the cascades that I can think of. Since this was a Saturday with a good weather forecast we encountered maybe 15-20 parties, well, we hadn't expected solitude and we didn't get it. Something I hadn't seen before was the unique combination of blue jeans and plastic boots that some people where wearing...

This was a private climb with a party of two consisting of Jim Prager and myself. 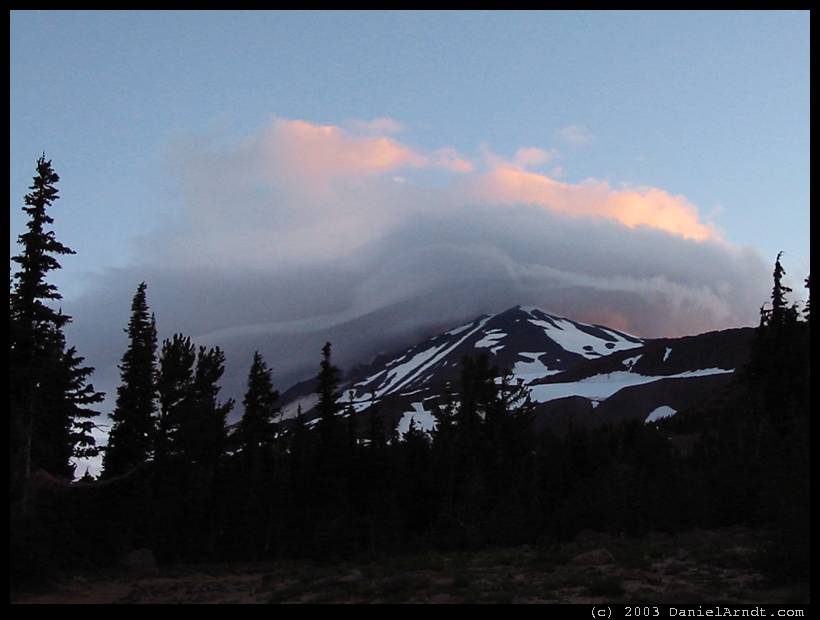 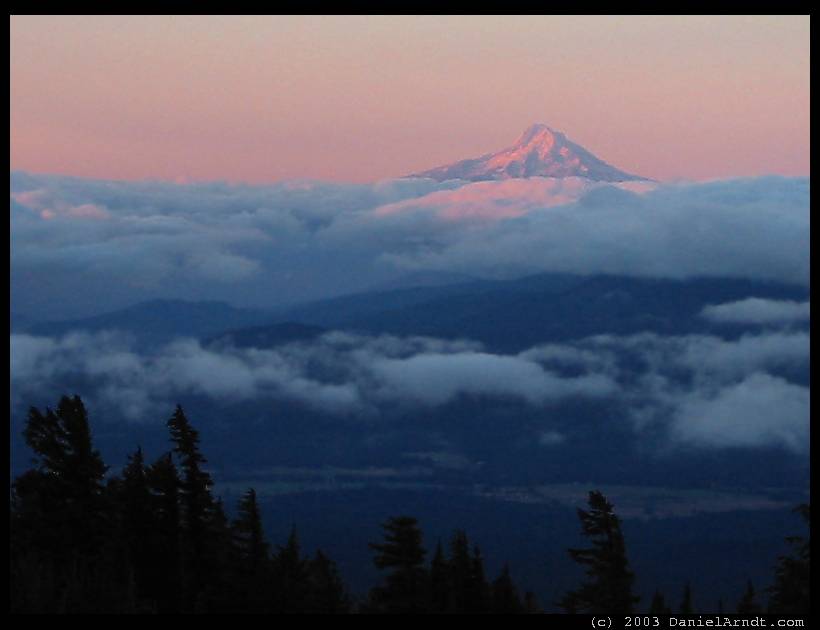 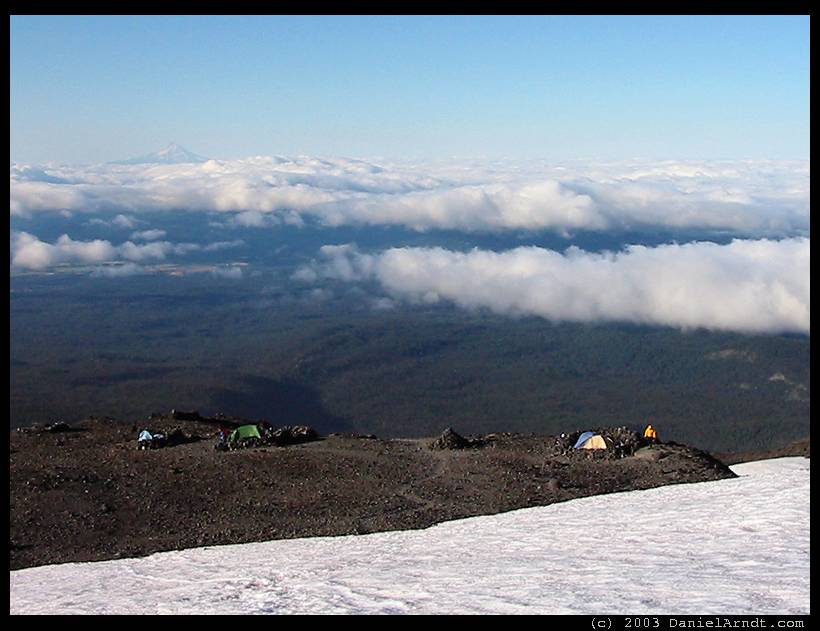 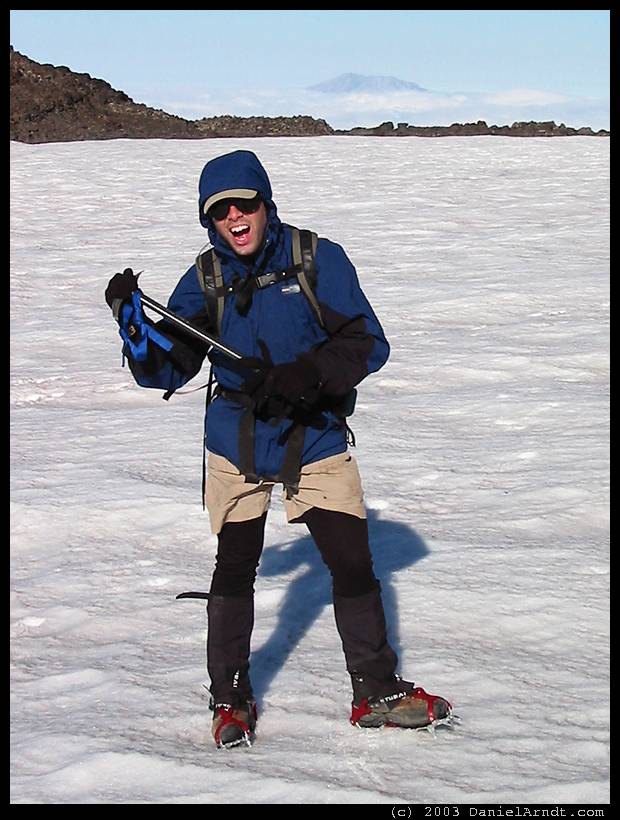 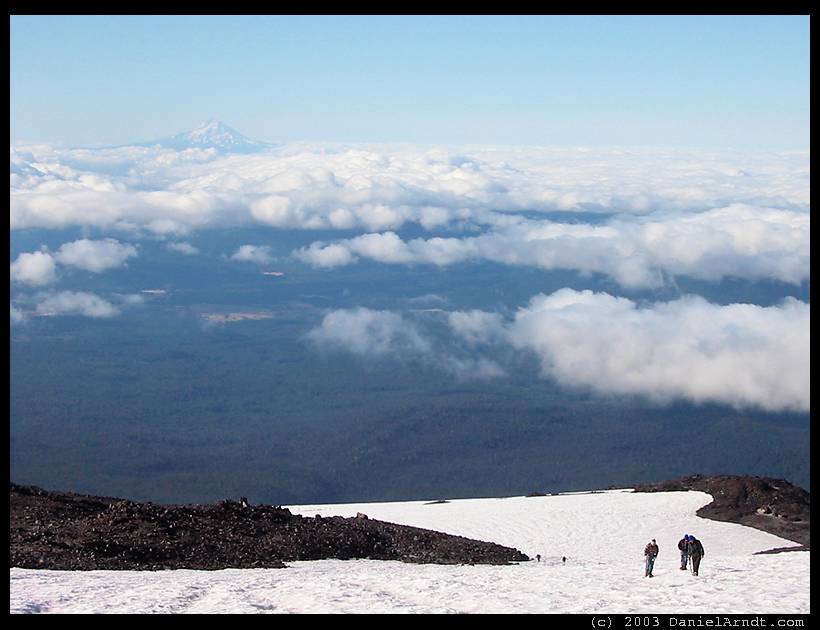 Mount Adams climb: on the false summit, perfectly lenticular cloud over the summit 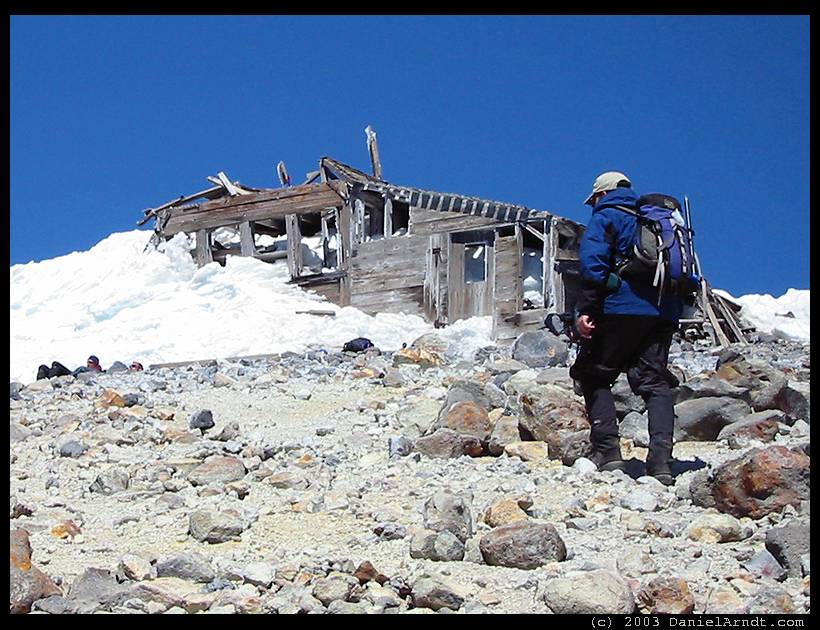 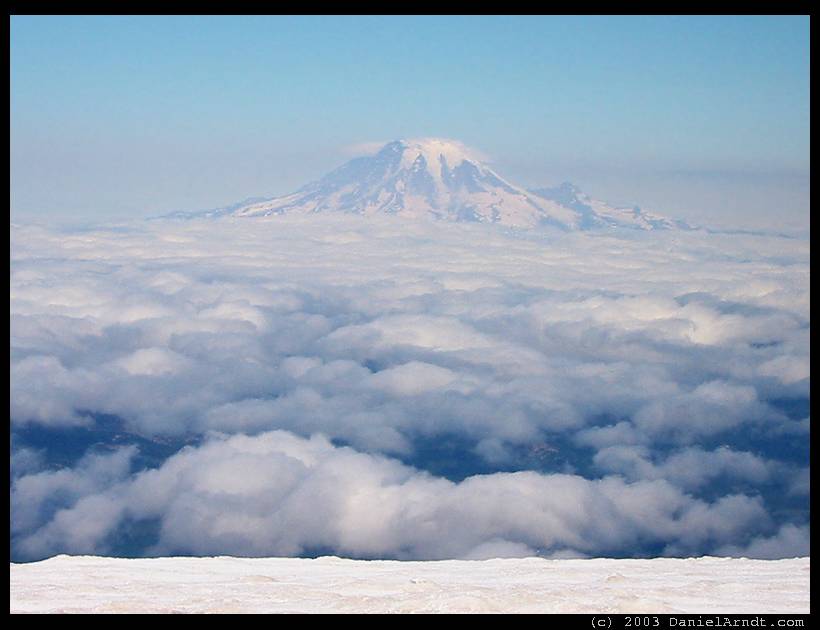 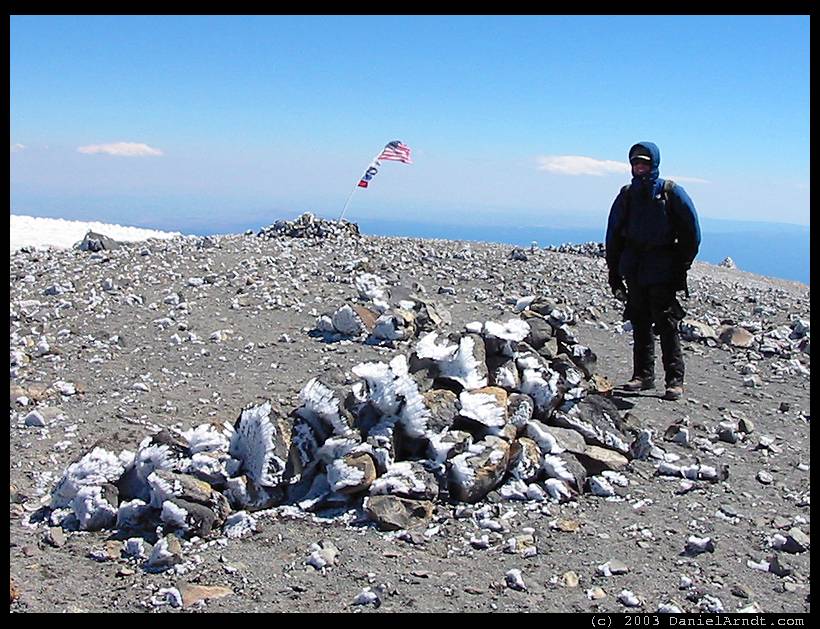 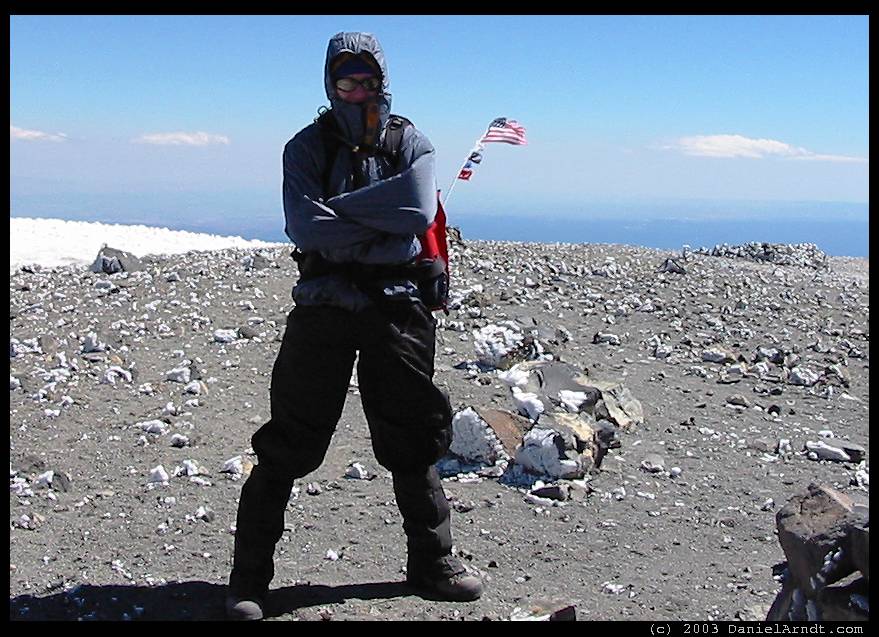 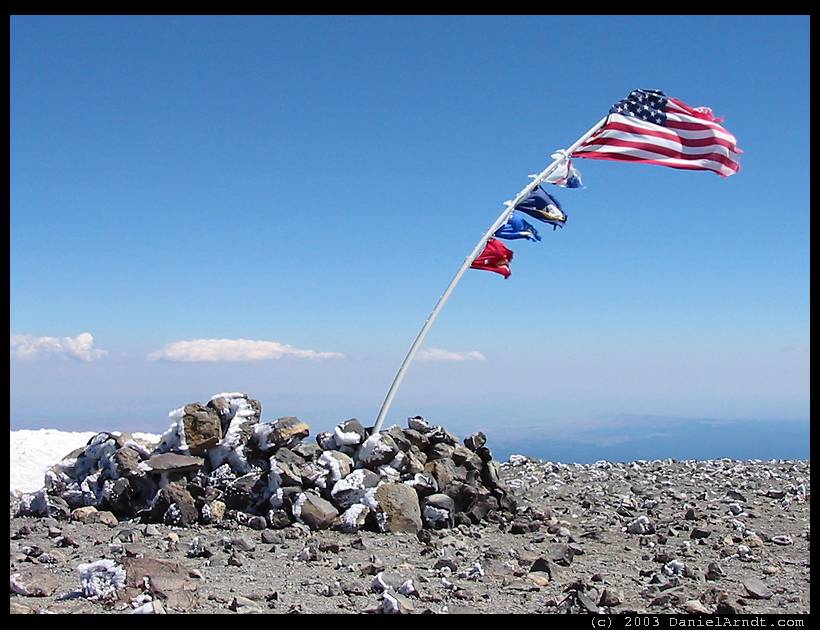 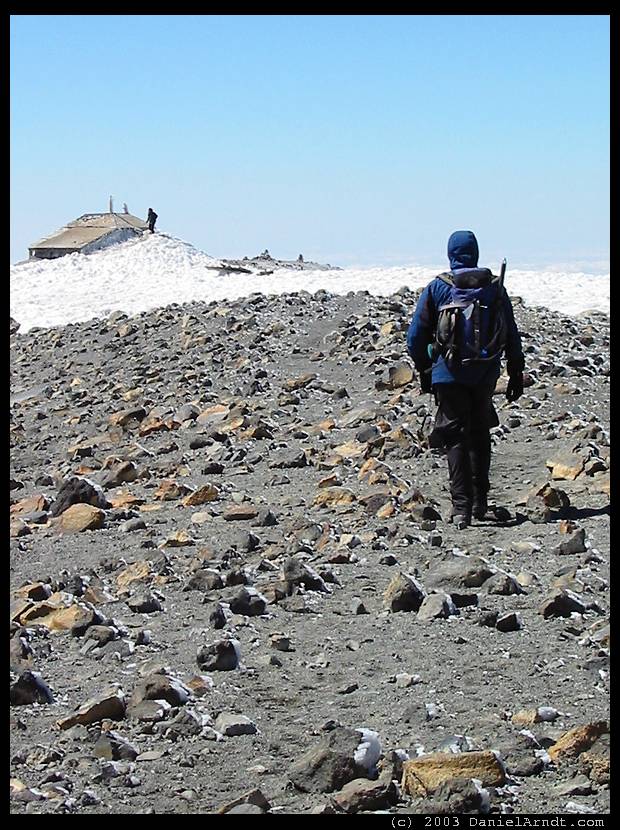 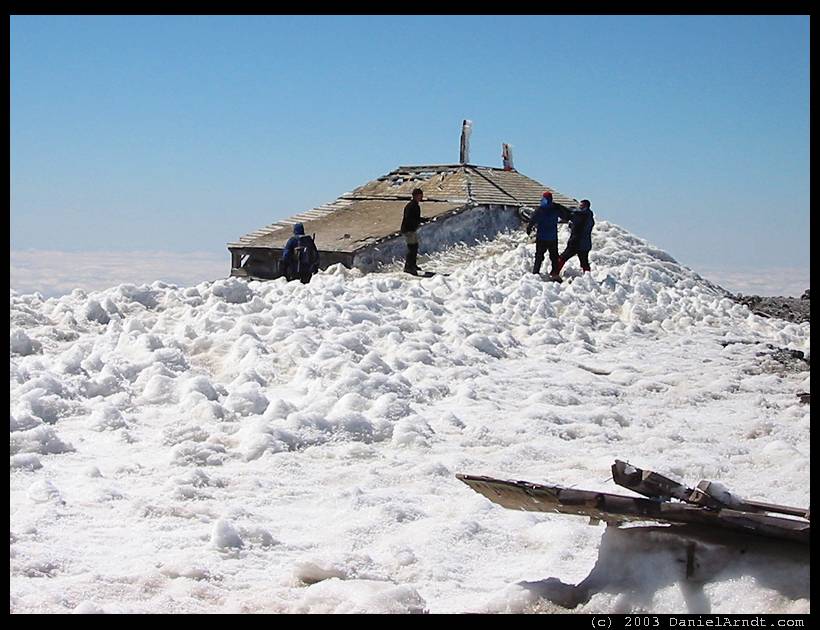