From Courmayeur to the Refuge Gonella

After climbing the Jungfrau in the Eiger-Jungfrau region the previous day we had spent the night in the car because all hotels in the Courmayeur region where booked. 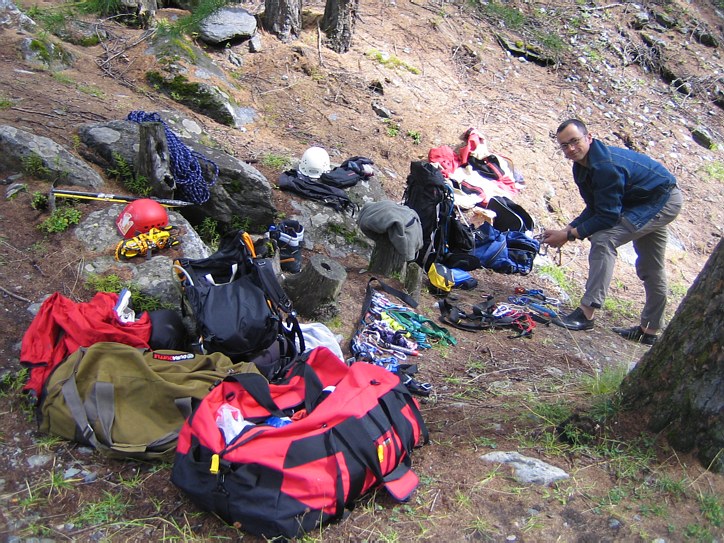 We got up in the morning and drove back to Courmayeur just south of the Mont Blanc massif. We first stopped at Aosta's public swimming pool to take a shower but it was closed. At a campground we had more success.

From Courmayeur we drove west into Val Veni. About 300m past the bridge crossing near Cantine de la Visaille the road was closed by a gate and we parked the car at an elevation of about 1700 m. We took a long time to sort our gear since we wanted to avoid taking too little or too much on this trip. The weather was great and the area was flooded with day hikers.

At noon we were on our way. After 30 minutes of walking up the road, we reached the little restaurant near Lac du Miage, a little lake in the moraine of the Glacier du Miage. After a quick lunch (13.00) we ascended the moraine of the glacier and soon left the tourists behind. Here, the trail changes to a well marked spur and enters a valley, about 700m wide, that is completely filled by the Glacier du Miage. The glacier is completely covered with debris, only on a few spots is one able to see some of the thick ice that lays beneath. The valley is bordered by huge rock walls on both sides which are several hundred meters high: On the southwest side they rise to the Aiguille de Tre la Tete (3930 m) and the northeast side of the valley is bordered by the Brouillard Ridge that rises toward Mont Blanc. It was very quite in the valley, because it is so well shielded: no wind, no birds, no water noise. The only noise are occasional thundering sounds from the regularly occurring rock and ice falls which are easy to hear but hard to locate with the eye. We only met a few people on our way up that large glacier: a couple that was just checking out the route and wanted to ascend Mont Blanc the following day; and three climbers who where descending. 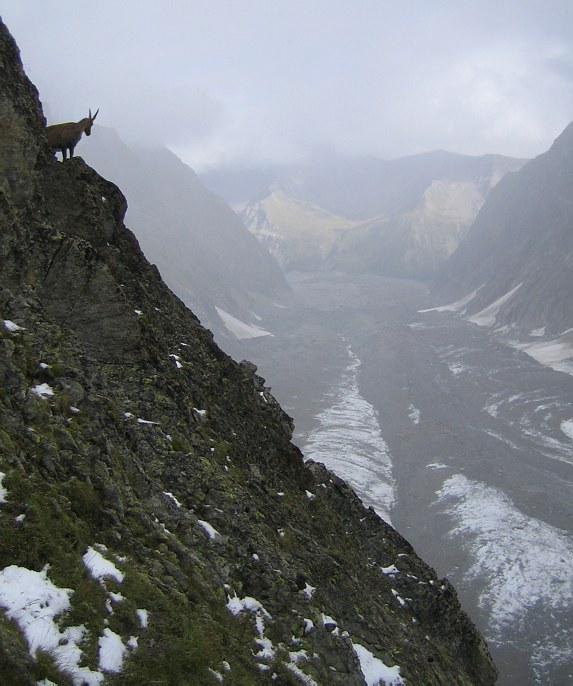 At first the trail goes along the western moraine but later it meanders toward the center of the glacier. About 4 km into the valley we got to a place where the Glacier du Mont Blanc and the Glacier du Dome come down on the right side and another smaller glacier comes down on the left side: one stands in the midst of an amphitheater formed by glaciers and rock walls, truly a spectacular place! The Refuge Gonella, our destination for the day, is situated on a ridge called Aiguilles Grises that separates the Glacier du Dome from the Glacier de Bionnassay Italien. The route description says to follow on the middle moraine of the Glacier du Miage up to an elevation of 2600 m and then to turn right where the glacier is less crevassed and one is able to reach the rock and ascend the ridge. But somehow we lost the spur and went toward the ridge too early, possibly guided by a big red marking in the wall which we misinterpreted as a trail marking but which instead seems to mark a rappel anchor. Trying to gain the ridge too early led us into a steep part of the glacier that was pretty much melted out. After jumping around and over crevasses we decided that it would be safer to rope up. After about an hour of looking for the way we got to a dead end and decided to retrace our steps which turned out to not be that easy. After a few dodgy crevasse crossings we finally reached the middle moraine which we followed to the correct elevation. All in all, we lost about 2 hours in the process but at least we were back on track.

Now the trail became obvious again: We crossed the glacier above the ice fall, gained the rock, and followed clear markings up the ridge. At some exposed parts there are steel cables installed. At one point the ascend is helped by an old rusty ladder that's connected to the mountain via a rusty wire... In the mean time the weather had turned bad with fog moving in and some rain. At 7.15pm we finally reached the Refuge Gonella. After talking to the host and catching up on the latest weather report, we decided to stay in the hut the next day when the weather was supposed to get better and go for the summit of Mont Blanc on Wednesday, where the weather -- according to the report -- should be even better with clear skies predicted for the whole day.

Mont Blanc: sorting our gear before the climb near the Cantine de la Visaille in Val Veni 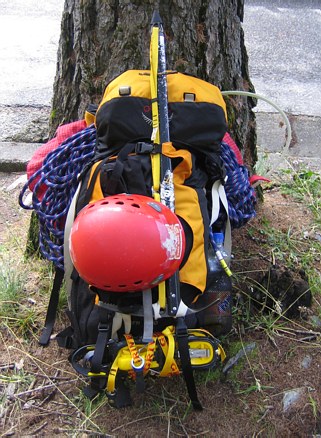 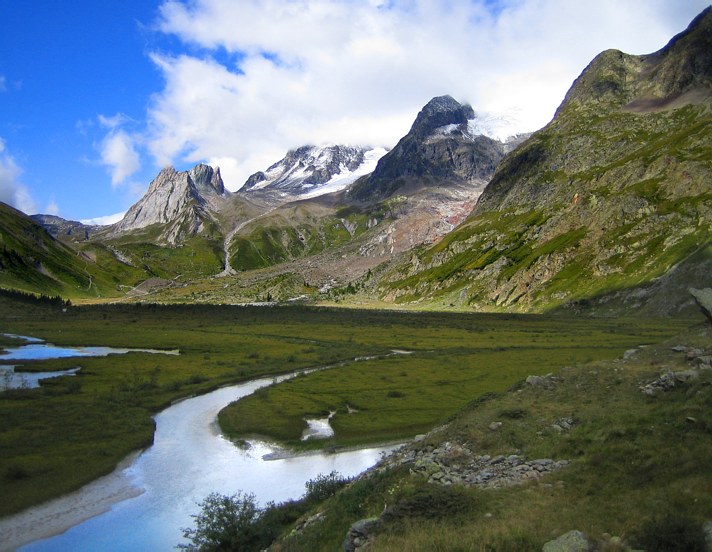 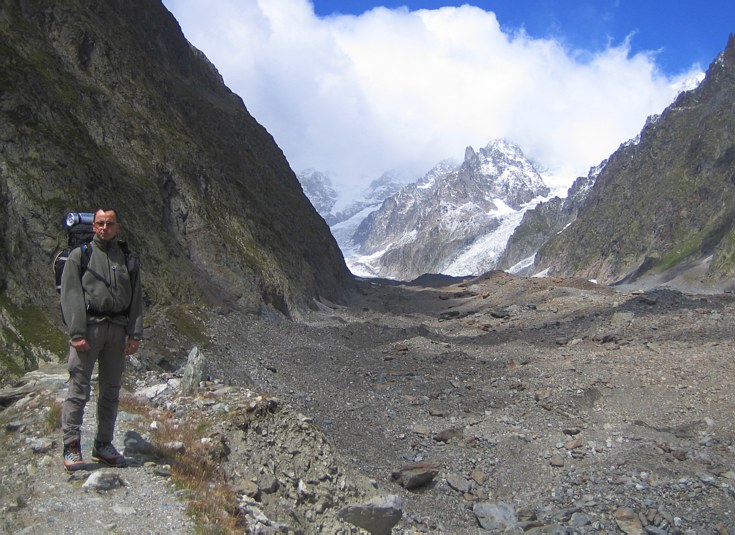 Mont Blanc: on the lateral moraine of the Glacier du Miage 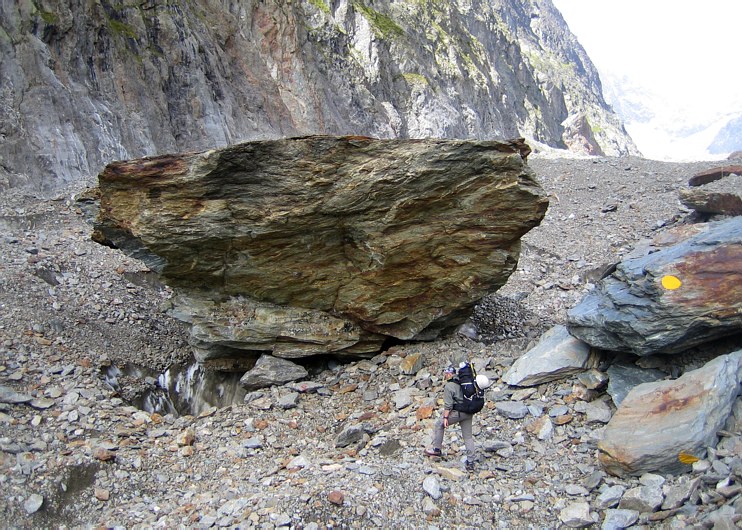 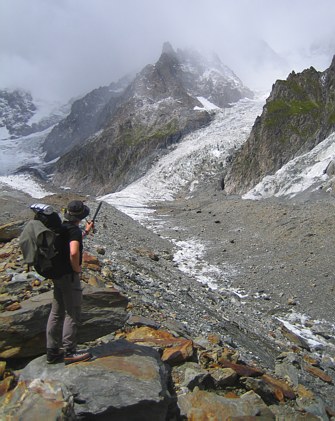 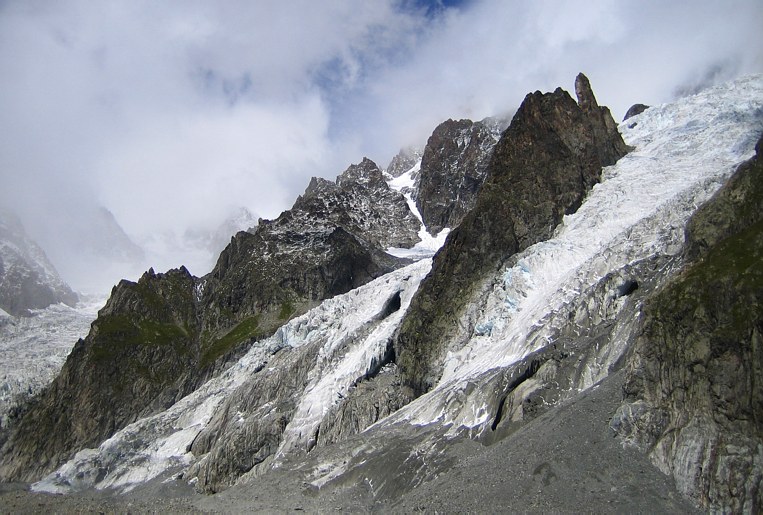 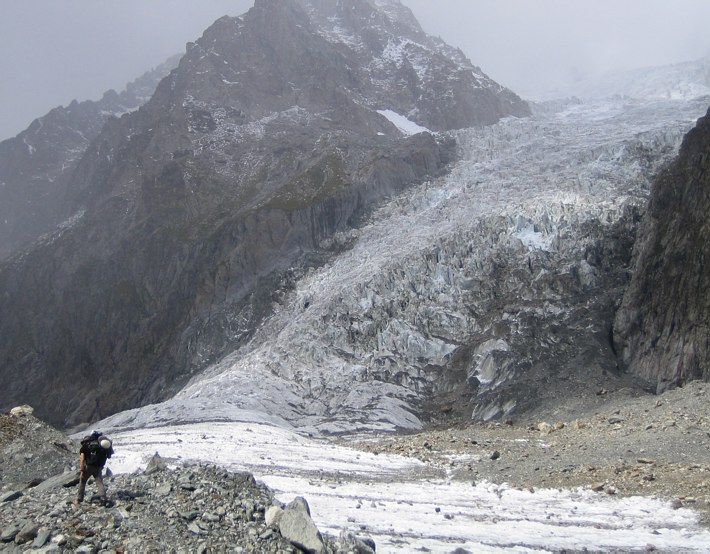 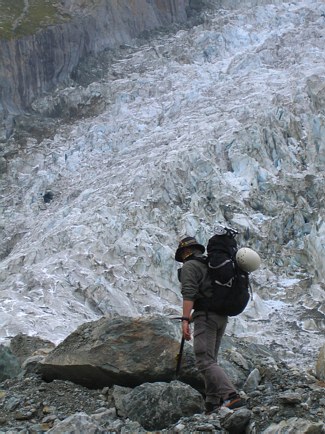 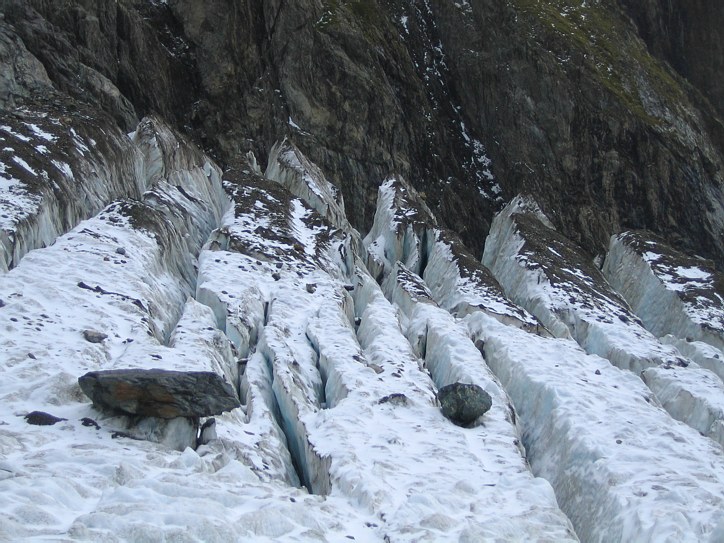 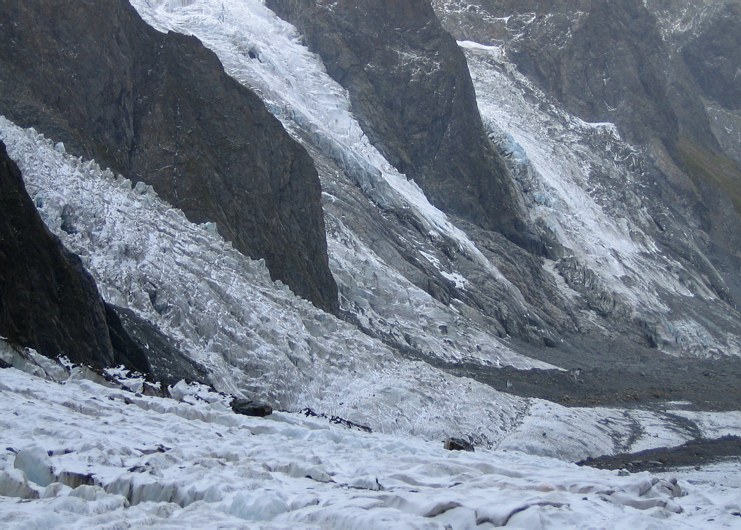 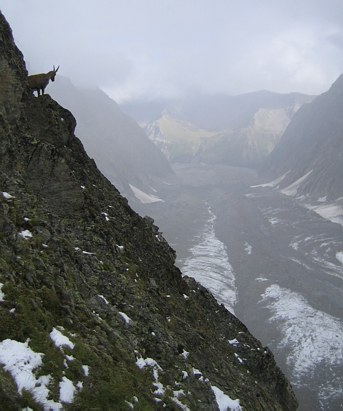 Mont Blanc: high up on the Aiguilles Grises 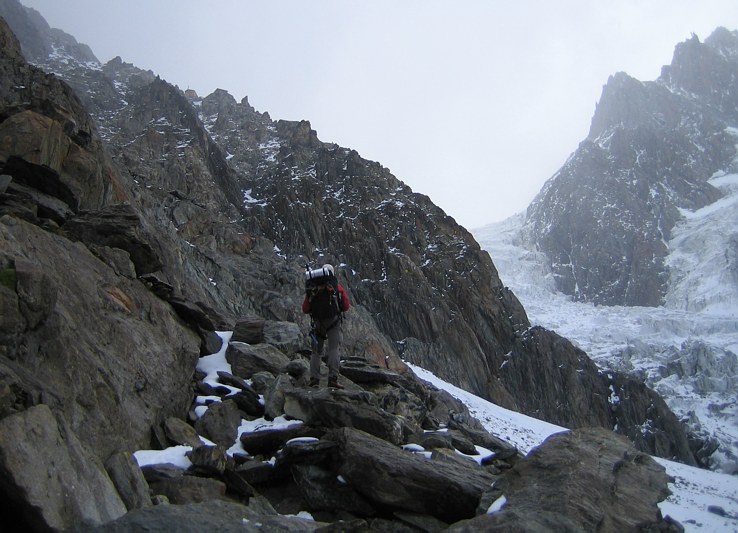