This was my third (!) attempt to climb 2705 m/8876 ft high Eldorado Peak. The first climb with the Seattle Mountaineers in 2002 failed because of avalanche conditions. Another attempt with Jim to do it in one day earlier this year had to be abandoned because of bad weather with whiteout conditions.

In August 2003 Jason, Darren, Matt, and I finally made the summit. Here's how it happened...

Our original plan was to climb Wedge Mountain in Garibaldi Provincial Park (British Columbia) but when the BC government restricted backcountry access in southern BC because of the wildfire issue we had to resort to an alternative: Eldorado Peak. Now, Eldorado is a bit too little for a 3-day outing, so we thought we would hike up to Inspiration Glacier the first day, do the traverse to Austera Peak on the second day, and climb Edlorado and hike out on the third day. Well, that was the ambitious plan at least...

We arrived at the Marblemount ranger station at 7am Friday morning and were on our way to the trailhead at the Cascade River road shortly thereafter. While driving down the road we noticed a smell of burning that became stronger the closer we came to the trailhead. In addition, even though it was already 8am or so, the sun looked red which we though was pretty unusual that late in the morning. We started hiking up the steep trail through the forest by 8.30am and when we came to the first boulder field we could see the smoke in the south, enfolding Mt Johannesburg and pretty much blocking the views past it. After climbing up the ridge on the west site of Eldorado Creek and dropping into Rush Creek Basin we roped up at the foot of Eldorado Glacier. The glacier is pretty much melted out and heavily crevassed. When I did this climb 6 weeks ago we could go straight up the glacier as there where only about a handful crevasses to cross. Now, we had to zickzack our way up and cross some pretty unstable looking snow bridges.

We arrived at the flat area on Inspiration Glacier by 4pm, set up camp, and had the whole place for ourselves -- nice! By that time the smoke was obfuscating over 180 degrees of the southern sky and we were a bit worried that the fires, which seemed to be in on of the adjacent valleys just to the south, would jump over the ridge into the Cascade River valley and become a real problem for us. The helicopters we saw fighting the fire didn't seem to make much difference. As there were still a couple hours of daylight left and we where unsure about how this would all play out, we decided to climb Eldorado that same evening. It was 5pm and since I had read in some trip report that the summit of Eldorado can be gained in about 1.5 hours from Inspiration Glacier we thought that we could make it up and down safely before nightfall. We took of at 5.15pm, made our way through the lightly crevassed upper portion of Inspiration glacier towards the summit ridge. After crossing to its north side (there are some very good bivy sites here, even water) we headed up the glacier, keeping the ridge to our left. The higher we came the more crevassed the glacier became until it became unpassable and we had to go on the rock ridge, scramble up about 300 ft, and find a place that would allow us to regain the glacier. Needless to say, with four people on the rope having to remove and put back on their crampons, this maneuver took some time. The snow became pretty steep just before gaining the knife edge and we placed a couple of pickets.

We finally gained the summit at 7.15pm and by the time everybody had marveled at the spectacular sunset (all that dust in the air really helped color the sky!) and taken many pictures the sun had set and it became pretty dark pretty quickly.
In fact, with a new moon just a couple of days ago it became really dark! Going down that glacier (me falling at one occasion), zickzacking those crevasses, scrambling down the rocky ridge (here we could actually see the flames of the fires), regaining the glacier, and finding our way back to camp--all in the shine of our headlamps--was a pretty scary experience and made me question our decision to climb the summit that same evening. All these wands that I had faithfully planted on our way up had become pretty useless at night. Anyway, we made it back to camp safely, cooked dinner, and went to sleep.
The sky was beautiful, very clear, except where those fires were burning, here it was gloaming red. Mars was a special sight, as it is very close to Earth right now.

When we got up the next morning it looked like the smoke had decreased but it became stronger again pretty soon.
After our climb last night it seemed that everybody had have enough adventure and we canceled our plans to traverse to Austera Peak. We hung out in camp that morning, enjoyed the great location, packed our stuff, and hiked out. We met 2-3 parties on their way up that had camped on the ridge. Down at the trailhead we talked to a park ranger who told us that the fires had been burning for several days now but are apparently contained. This explained why nobody had mention the fires when we got our permits at the ranger station. After milk shakes in Marblemount we drove back to Seattle.

This was my third attempt to climb Eldorado Peak. the first two attempts failed due to avalanche danger and bad weather. This one finally succeeded. Eldorado, although having a somewhat demanding approach, is considered pretty easy glacier climb. In the late season conditions that we encountered, however, navigating the maze of crevasses became pretty demanding and increased travel times significantly.

This was a private climb with a party of two consisting of Jason Racey, Darren Hoffman, Matt Brown, and myself. 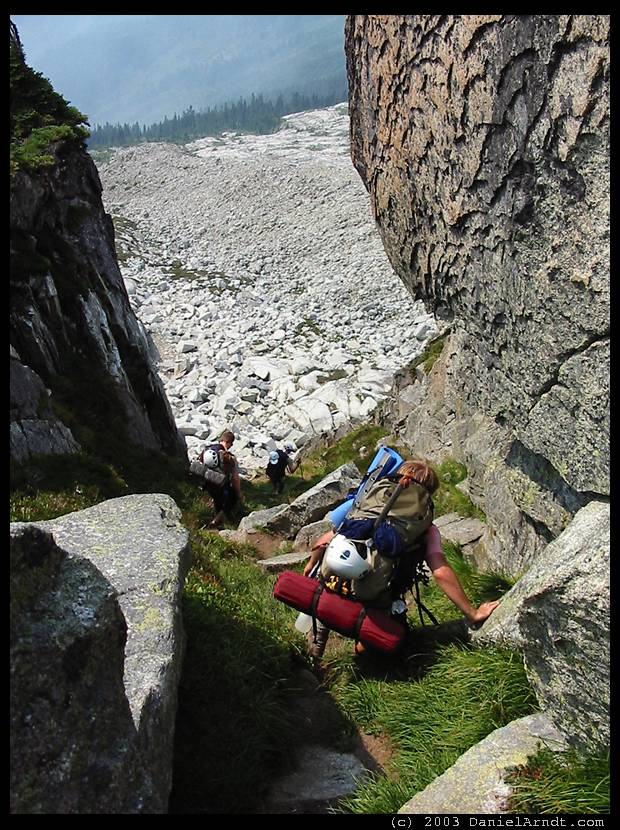 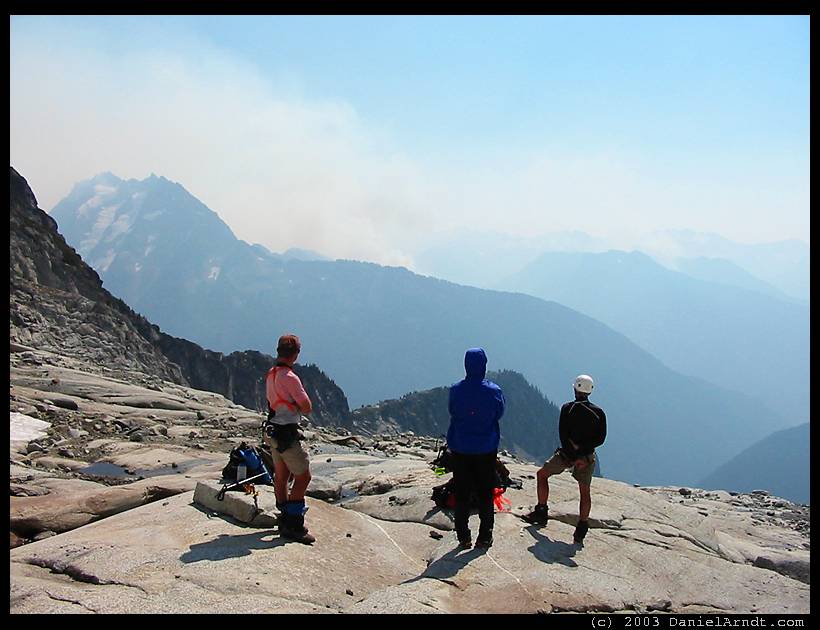 Eldorado Peak climb: at the base of Eldorado Glacier, watching the wild fires in the south 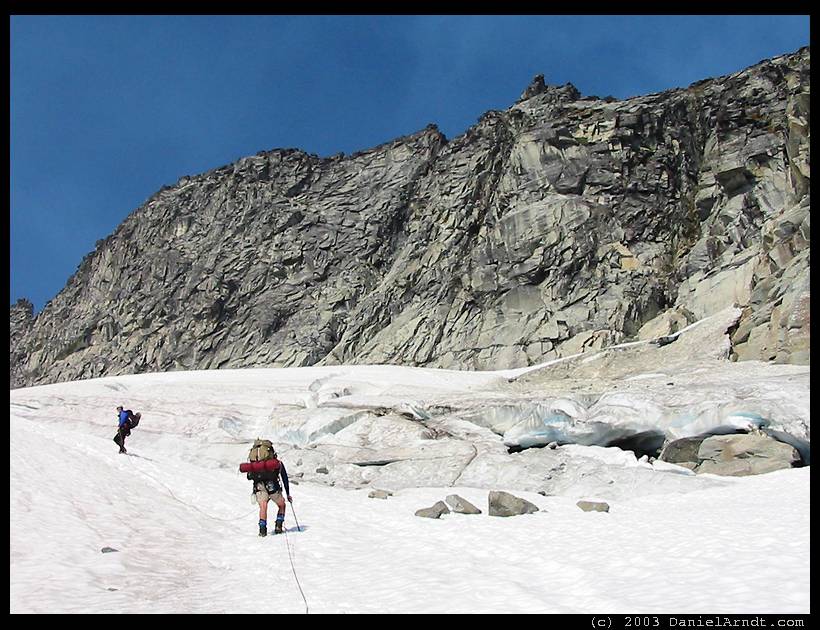 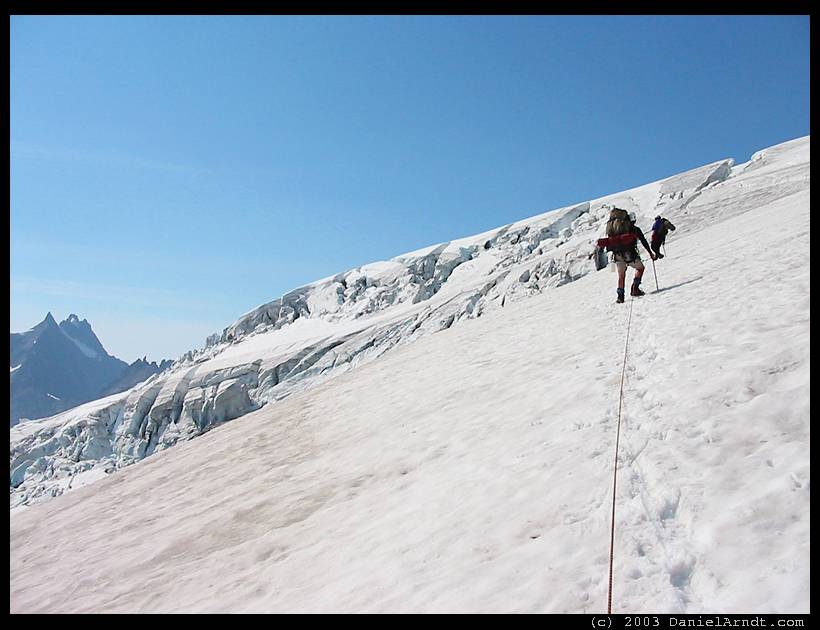 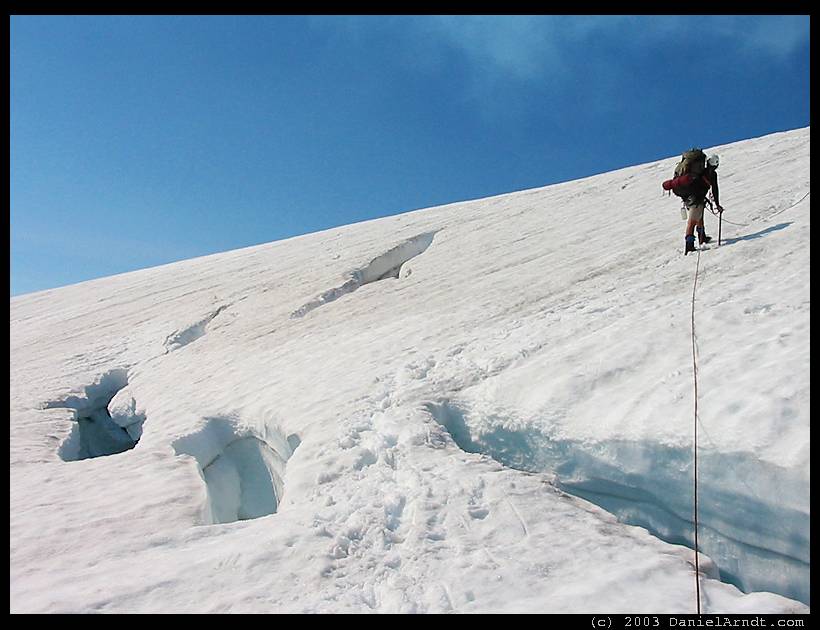 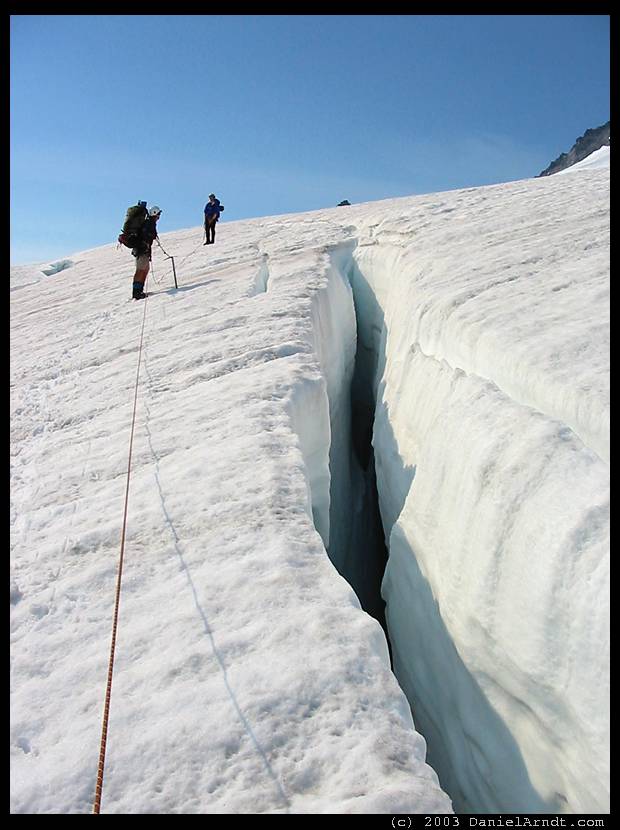 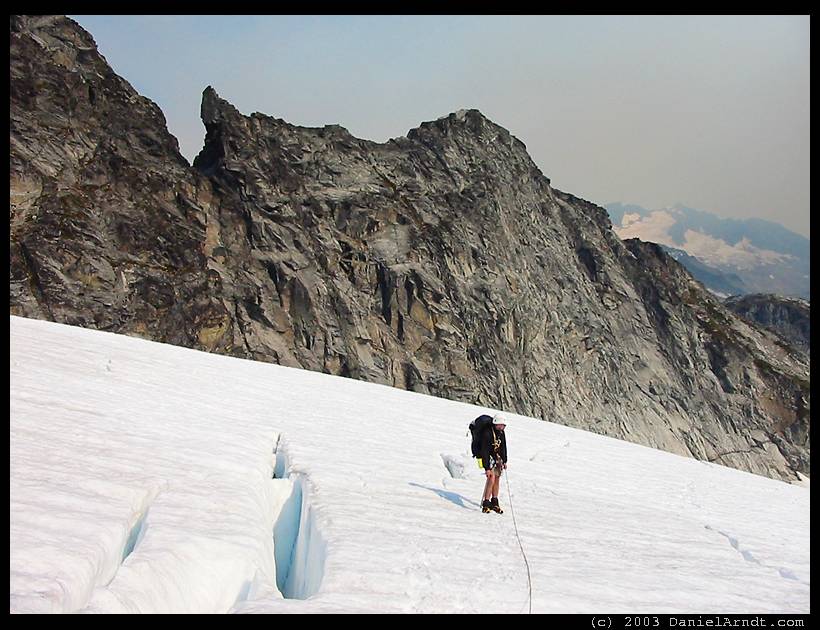 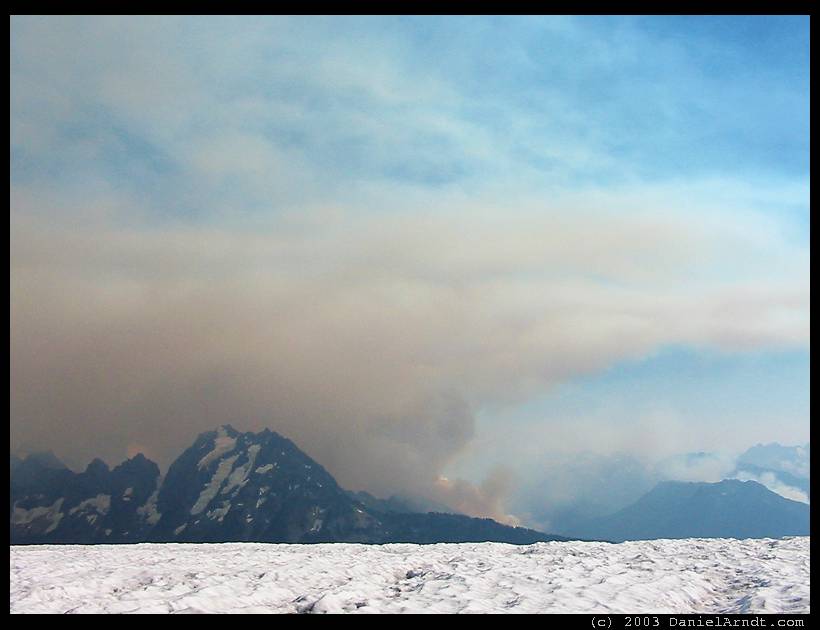 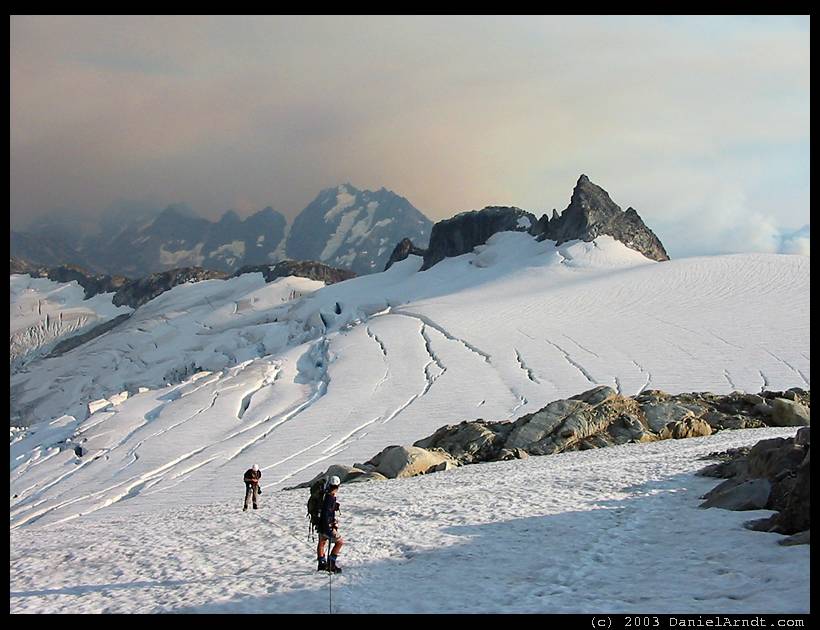 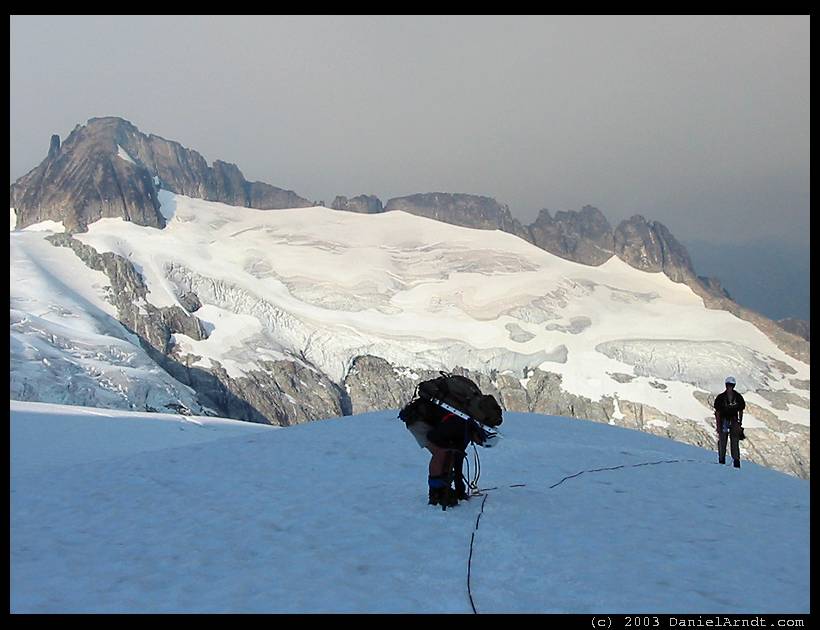 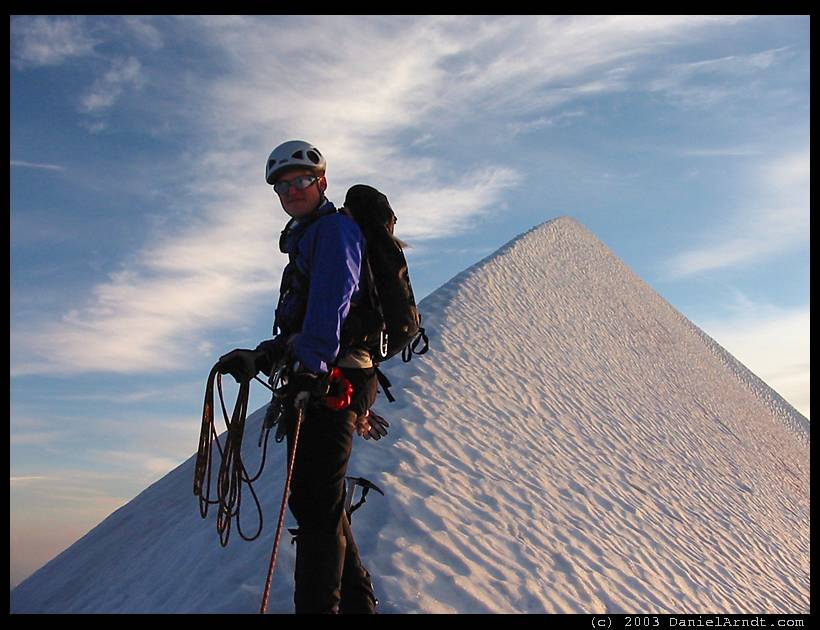 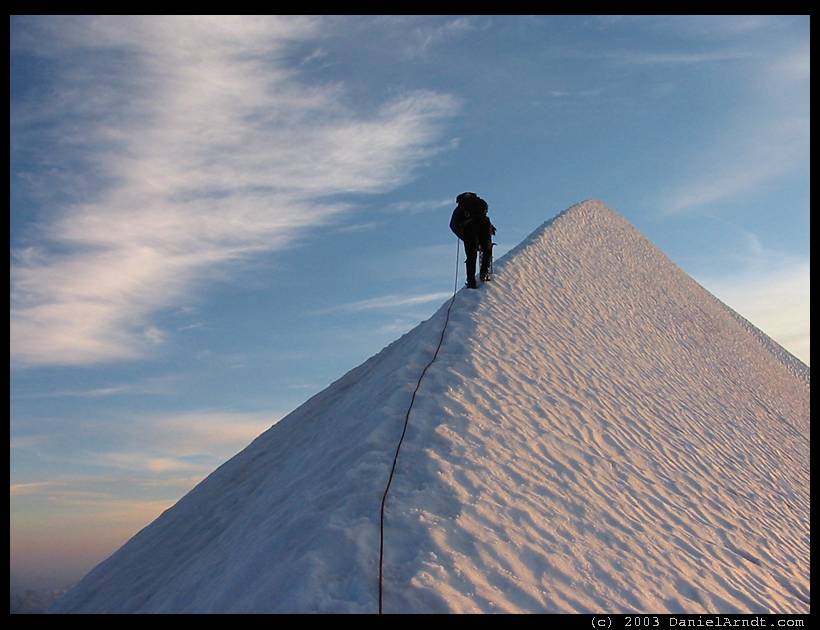 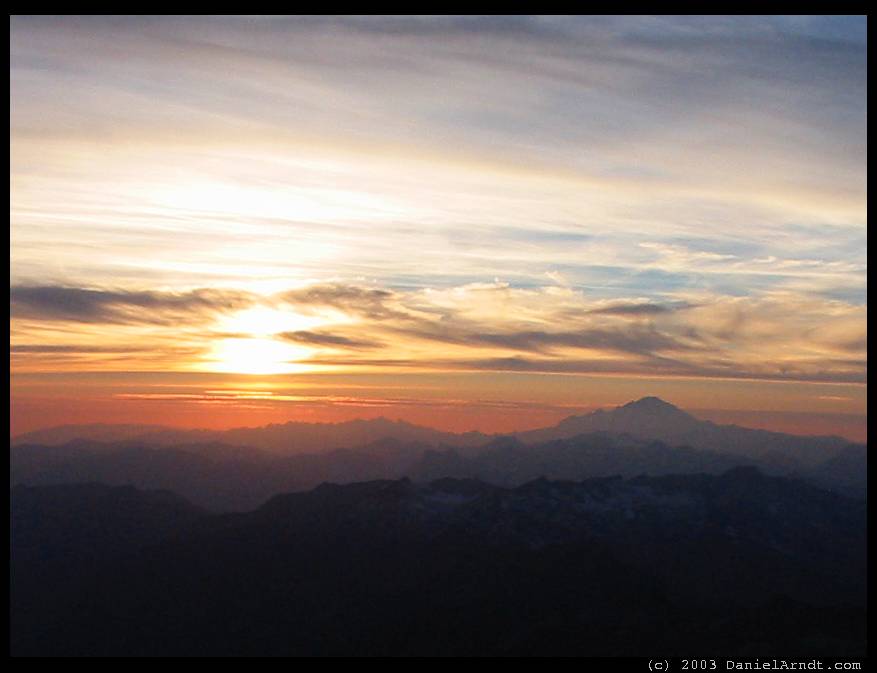 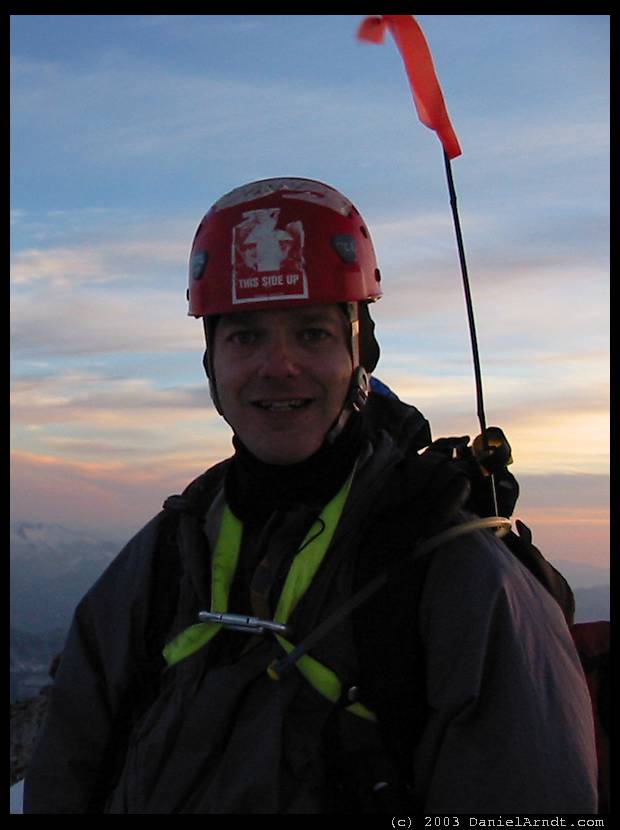 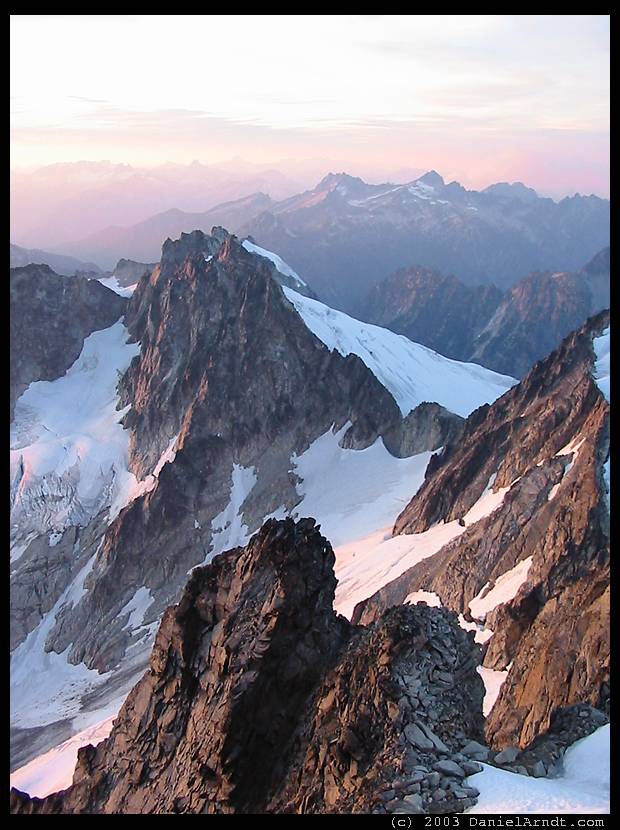 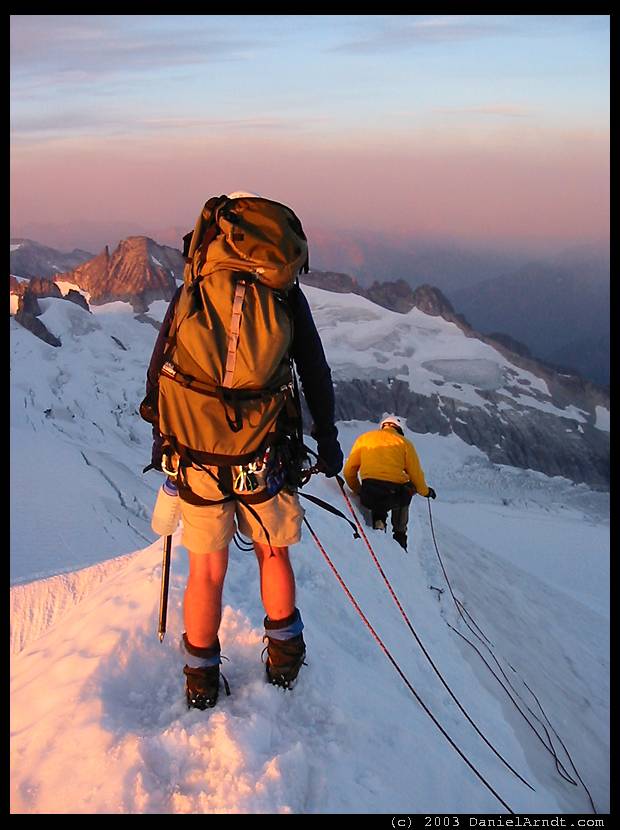 Eldorado Peak climb: Darren and Matt on the summit 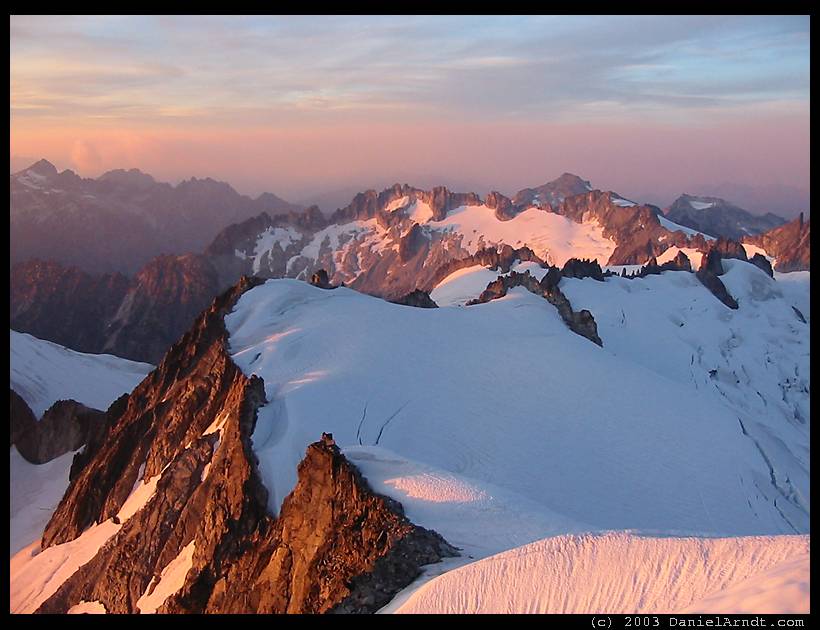 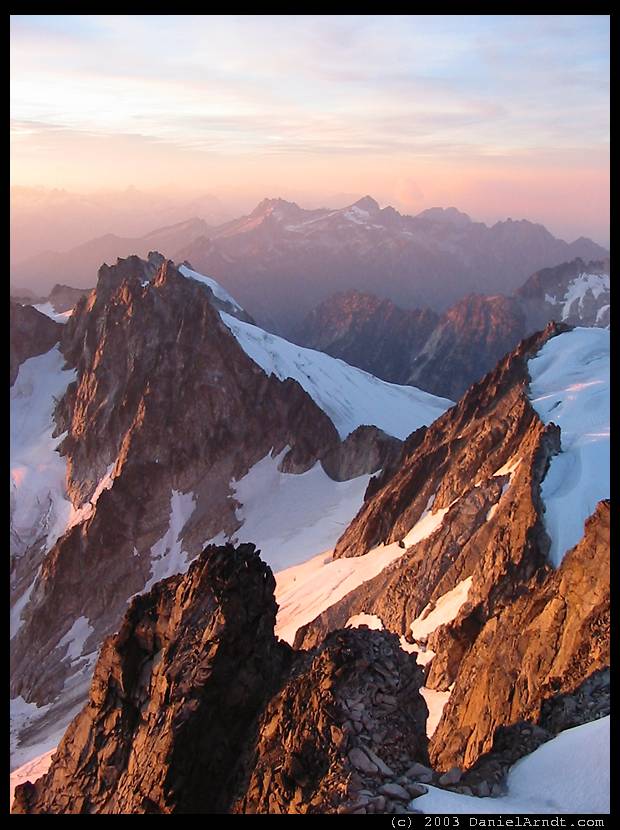 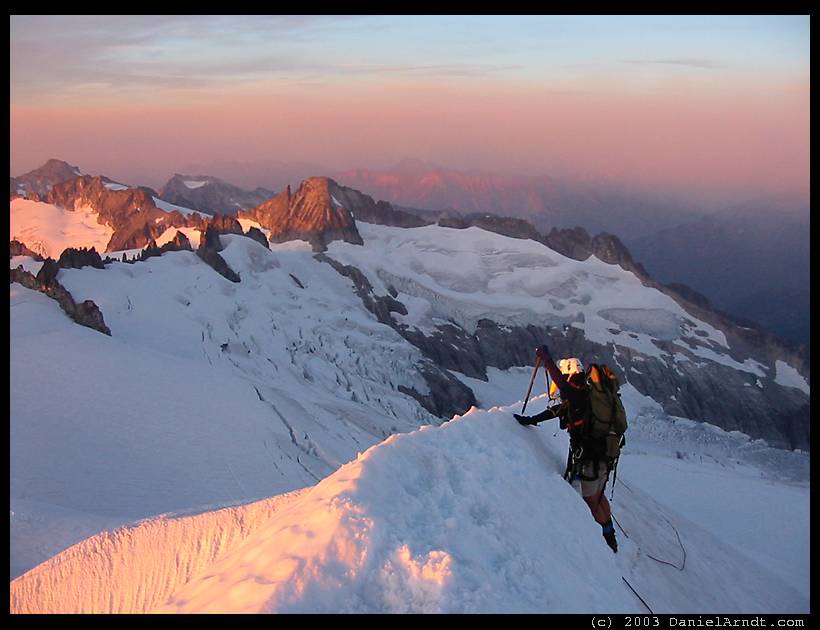 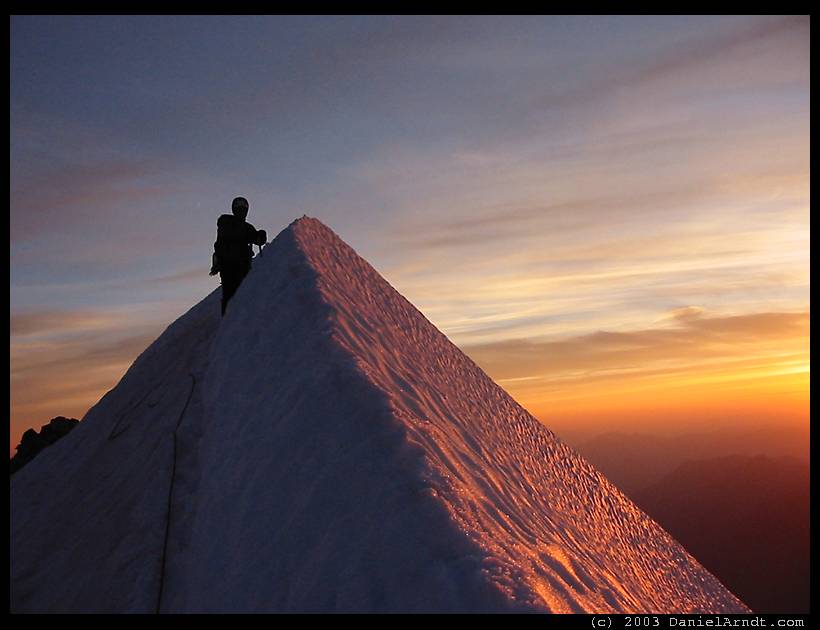 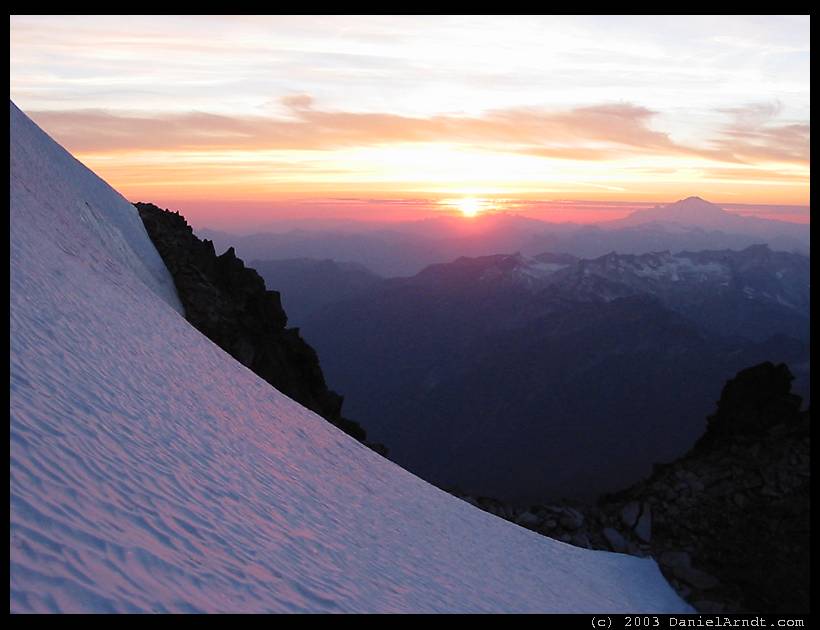 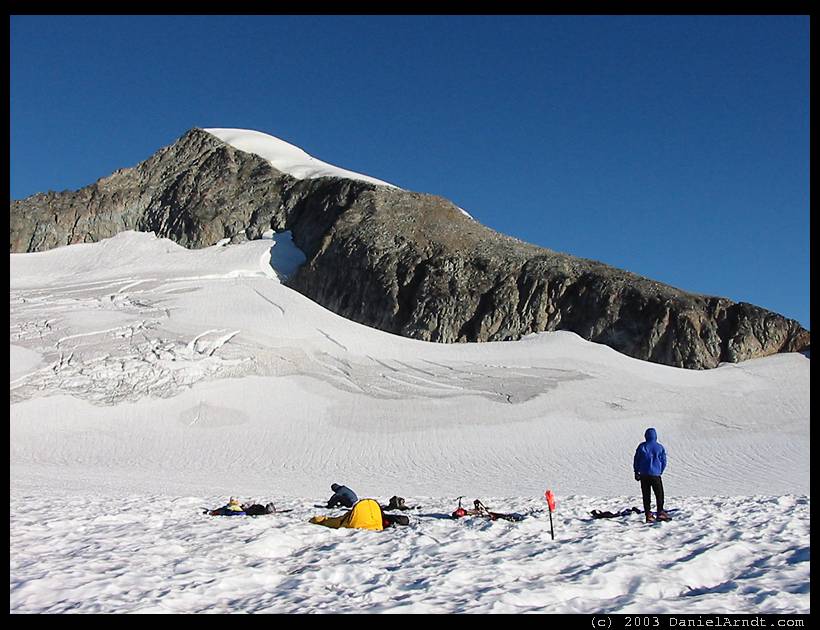 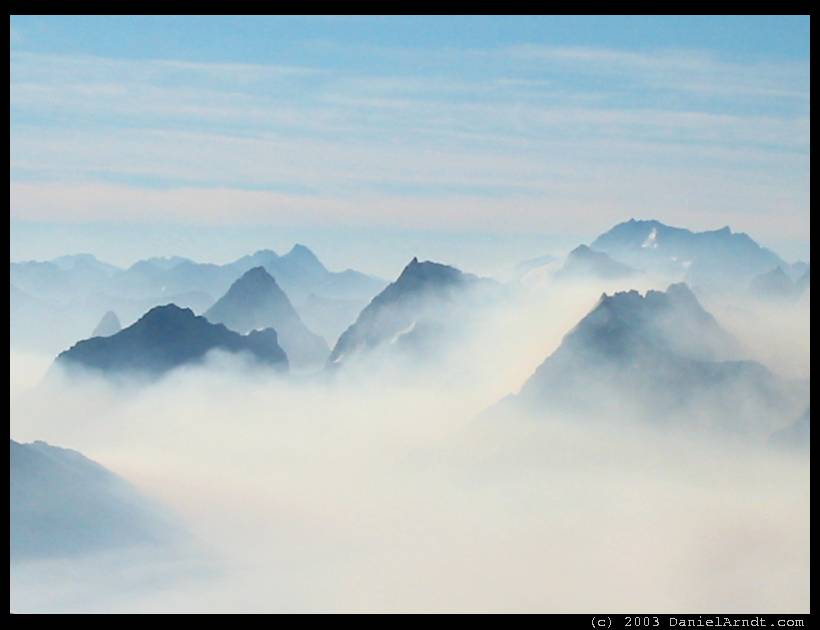 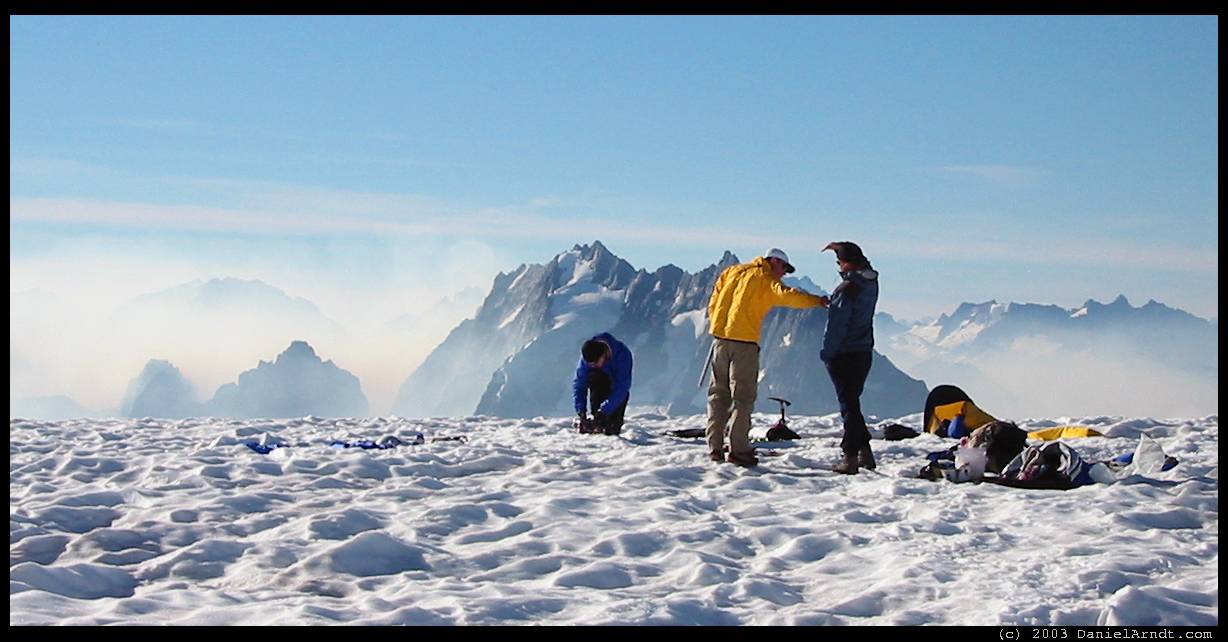 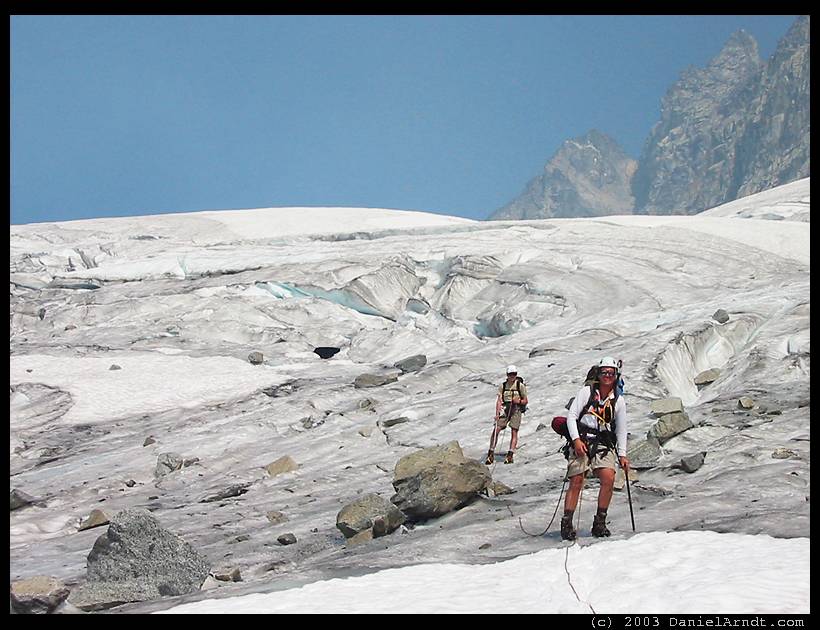 Eldorado Peak climb: at the base of Eldorado Glacier in Rush Creek Basin 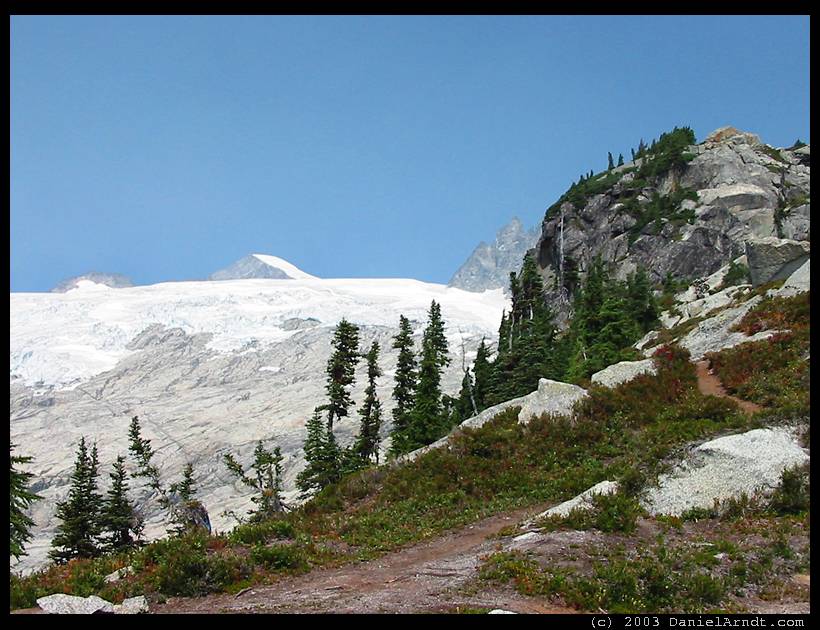 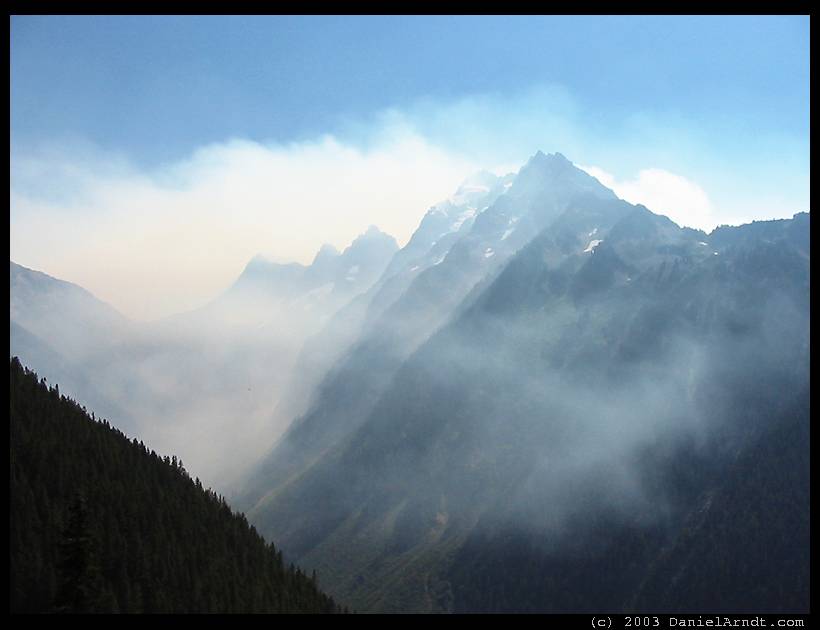