This was an attempt to climb the Zugspitze near Garmisch-Partenkirchen, Germany's highest mountain via the Höllentalklamm which was supposed to open on that day for the season. It was very early season for this climb but we gave it a shot anyway.

Ursula, Claus-Dieter, and I left Munich at 6.30am to drive to Hammersbach near Garmisch-Partenkirchen. Since we had stopped on the way at a bakery to fetch some breakfast and coffee, it was already 8.30am when we started to hike toward the Höllentalklamm. The Klamm -- a very narrow gorge -- has been made accessible by a number of electrically-lit tunnels, catwalks, and bridges. During the winter most of these installations are removed because of the snow and the gorge is closed. After hiking through the forest we reached the Höllentaleingangshütte which is at the entrance of the Klamm. Instead of stopping for some beer and cake we pressed on, payed the fee of 1 Euro and entered the couloir. We made it quickly through it, marveling at all the pretty waterfalls. While the lower section was snow free, there was a lot of snow in the upper sections. Toward the end, when the couloir widens we passed by an abandoned hydroelectric power plant built many decades ago for mining purposes and is now decommissioned.

30 minutes later we reached the Höllentalangerhütte (which was still closed for the season, so no food and beer here) where we took a short break before we approached the "Brett", a pretty steep rock wall made accessible by iron steps and steel cables. Some passages where still snow covered, but the installations were mostly snow free. Above the "Brett", there was a lot of snow and it was difficult to make progress since we had to posthole the whole time. At 2.15pm we had reached a point from which we could see the Höellentalferner glacier at an elevation of about 2000 m. From there we could inspect the step rock wall behind the glacier that one has to ascend in order to reach the summit. Since it had snowed quite a lot in the past week (reportedly 1,5 m on the summit), the face was pretty snow covered and we weren't sure if it was doable at all. Also, it had started to snow and since it was already pretty late and we didn't know when the last cable car would run to get us off the mountain, we decided to return at this point.

This turned out not to be a bad idea, since rain and snow turned into a thunderstorm. We reached the couloir quickly and passing it during that strong rain was a great experience: There was considerable more water running down than in the morning and the a lot of water came down the walls of the gorge which was pretty spectacular. Dripping wet we reached the Höllentaleingangshütte where we got some drinks. We reached the car around 6pm, had some Running-Sushi in town and were back in Munich at 9pm.

Update: A few weeks later a lot of the snow had melted and we completed the climb. 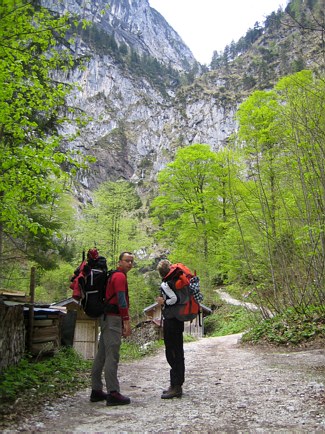 Höllental: near the entrance to the gorge 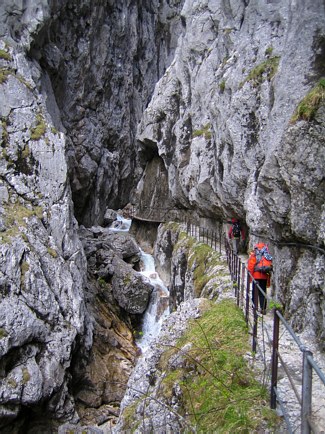 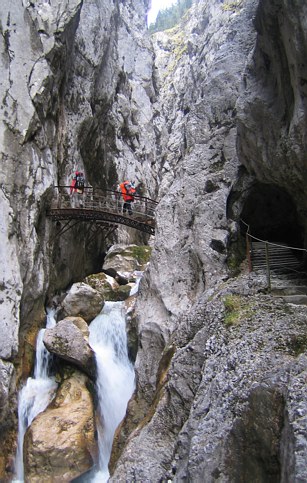 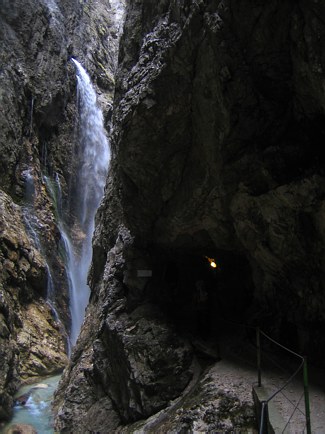 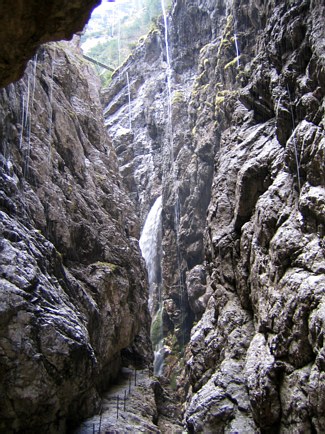 Höllental: in the Höllentalklamm gorge, notice the bridge high above 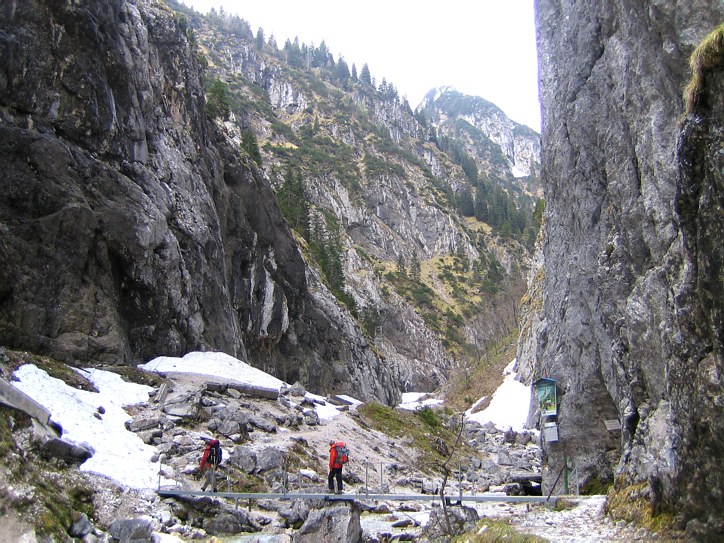 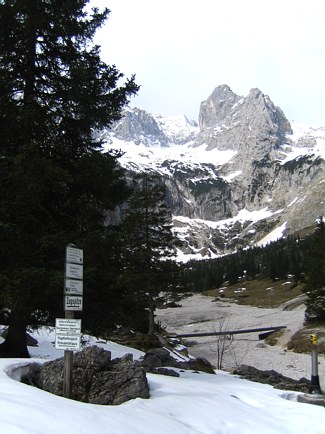 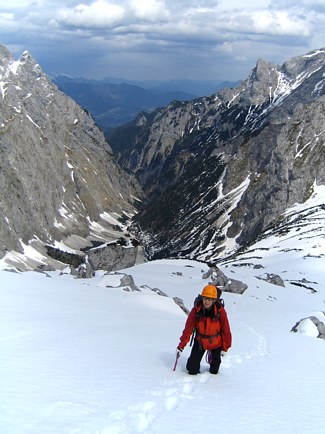 Höllental: looking down towards the gorge 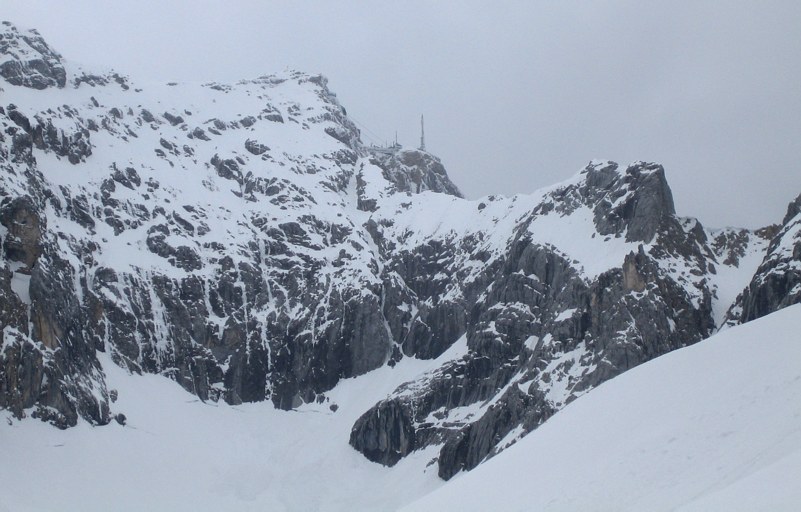 Höllental: Looking up towards the Höllentalferner glacier and the Zugspitze. Notice how much snow is still on the face where the route goes. 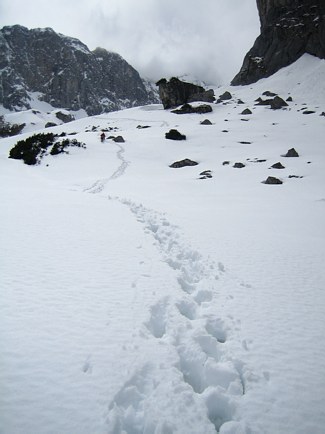 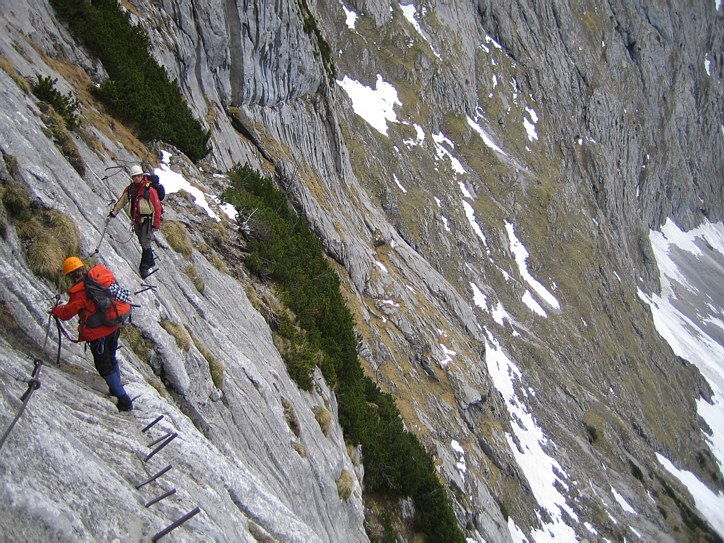 Höllental: on the "brett", a crucial part of the Via ferrata 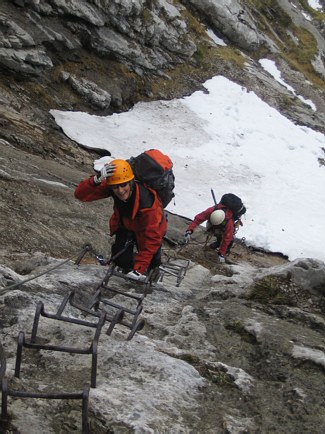 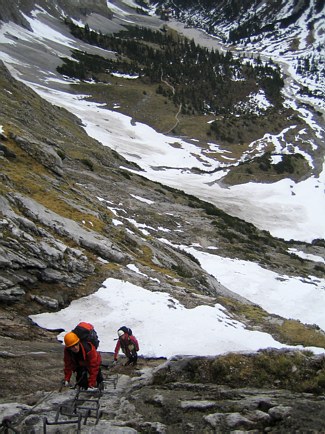 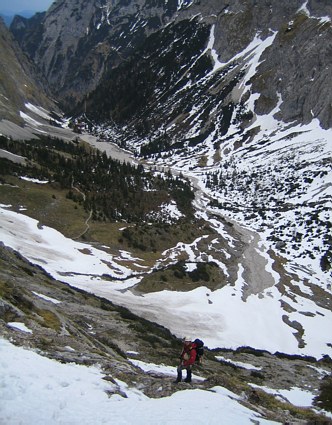 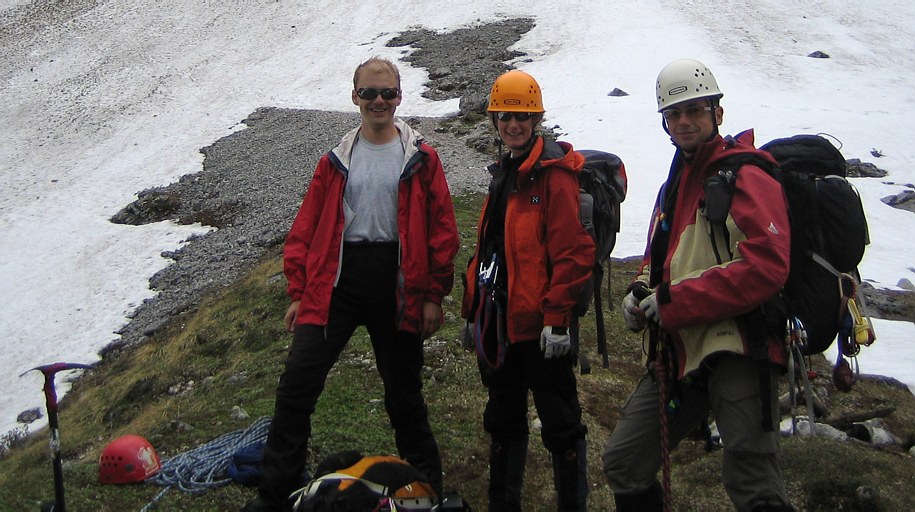